A Field in England Review 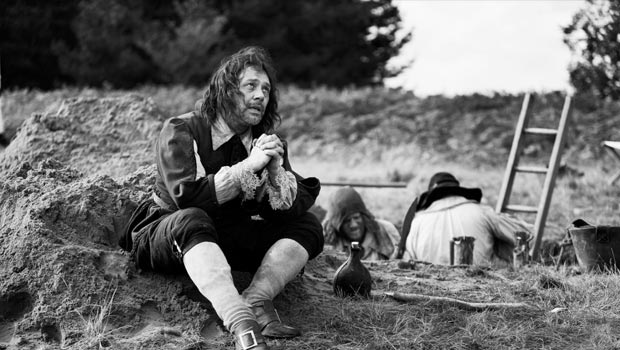 Ben Wheatley is important for British cinema, not just through his own output, but because of the path he forges for others. He is making low-budget, ambitious films, made and set in the UK, free of the usual Guy Ritchie or Richard Curtis genre requirements – and f being successful. The British don’t get many auteurs that aren’t swallowed by Hollywood; Wheatley could be the first in a new mould. These are high expectations for a new director, and A Field in England is the perfect movie to bring them crashing down to earth.

It’s set during the English Civil War, a group of deserters flee from a battle but get stuck in a field. It opens in chaotic fashion deliberately designed to disorientate the viewer, and gradually descends away from narrative and into hallucinatory weirdness. Like Michael Haneke at his most annoying, it seems determined to keep the audience at arm’s length, the humour often so mannered it’s not clear if it’s meant to be humour at all.

The plot, such as it is, involves hidden treasure, mind-bending mushrooms, Christianity and the occult. It’s quite odd. The film’s greatest charms are in its character interactions, often based around class and intellectual differences. Sadly these moments become less frequent the longer the film goes on. It’s a cast of mostly comic actors, including a brief cameo from Julian Barratt (The Mighty Boosh) and a standout turn from Wheatley regular Michael Smiley.

Wheatley’s first feature, Down Terrace, was made with friends for almost nothing and filmed in only eight days. It’s fresh and brilliant, a very British twist on Lars von Trier and the Coen Brothers. His follow up, Kill List, is two-thirds of a masterpiece before the final act goes off the rails, with what is now a primer for the even more oblique A Field in England. The camping-comedy Sightseers was Wheatley’s entrance into the vaguely-mainstream, but for me was a disappointment, with a plot from a bad Simon Pegg movie.

A Field in England is your archetypal post-success movie. Having received critical and commercial acclaim with his previous features, the director takes advantage of the chance to make something indulgent. The film was already going to be unpopular – you didn’t need to poison the well further by shooting in black and white. Individual scenes show the talent involved in the production; as a conventional film it could have been interesting.

It’s the kind of film that has you scratching around for bullshit analogies to try and get it to make sense. English Civil War, country at war with itself… is that the London Riots? Or maybe the lingering consequences of Iraq? Searching for treasure, losing your soul – that has to be the bankers. These interpretations don’t add anything to the film, if accurate they just make it more stupid.

The key talking point around the film is its distribution model. A Field in England is released today (5th July) simultaneously in cinemas, on DVD and video-on-demand. It is even screening on Film4 at 10:45pm tonight. Unfortunately, as a distribution experiment it is completely useless, because the film has no audience. Accessible in distribution, entirely inaccessible in style.

Films like this give art movies a bad name. Sometimes studio oversight isn’t such a bad thing, to stop directors disappearing down rabbit holes. Perhaps I am writing as a disappointed fan, but I am convinced Ben Wheatley has not yet come close to realising his potential. This is only worth watching if you’re a Wheatley completist, most will be confused and bored. Watch Down Terrace instead, it’s great.