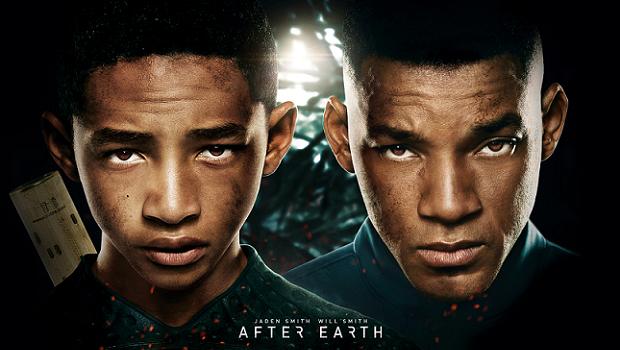 If, in After Earth, you told Will Smith that it takes two to tango, he would probably slap you in the chops and scream some army-esque jargon at you. And that is, essentially, what After Earth is; it is promoting the idea that to become a man, one must stand on his own two feet – whilst fighting a planet full of murderous, brutal and super strong mammals, of course.

Directed by M. Night Shyamalan, After Earth is set one thousand years in the future on a distant planet, Nova Prime, now inhabited by a unified Human race, Will Smith is Cypher Raige (where do future people get these crazy names from?), a general in an intergalactic army, The Ranger Corps, who’s duty it is to protect Nova Prime and the Humans from vicious, faceless aliens, the S’Krell. These alien bastards send arachnid looking beasts to the planet who can smell fear in an attempt to conquer Nova Prime, but after Cypher is able to supress his fear and ‘Ghost’, he is able to lead the Humans to victory.

Sounds pretty good, doesn’t it? Well, half of what I’ve described to you never gets seen, and the other half only lasts for 5-10 minutes with a monotone narration from Jaden Smith, who plays Cypher’s son, Kitai.

Kitai, like most boys, wants to grow up to be like his dad. What doesn’t make any sense is why he would want to be like an unaffectionate, absent, anal and regimented father who treats him not as a son but as a private in his army is beyond me. So, for a bit of father-son bonding, Cypher decides that Kitai is coming on his last excursion with him before his retirement. Cue asteroid storm that only ever happens ‘once in a million’. Cue crash landing on Earth. Cue seventy minutes of Jaden Smith’s one expression – whine (get me off this planet, pronto!)

Aside from the disappointing acting and the unoriginal plot, big kudos has to be given to the visual effects in the movie. Even though it is set on Earth (so locations are easy to come by), each animal moves realistically in the environment (more than can be said for the acting), and whilst the alien does have a very Starship Trooper’s ‘Bug’ look about it, you can see that time and effort has been put in to make sure that this side of the film works.

What ruined the film is the fact that this was a Smith family engagement. Whilst trying to utilize a father son bond that worked so well in The Pursuit of Happyness, the same connection failed to reach an audience who are willing to accept it. Their working relationship is so famous now that their star status overshadowed the film itself, pushing After Earth to be less about growing from a teenager to an adolescent, and more to ‘would Jaden be able to reach the nearest petrol station if he and his dad broke down in the woods.’

Unfortunately for us, an After Earth 2 is already in development, according to IMDB. However, after its horrendous display at the Box Office in it’s opening week, we’ll have to wait to see if it’s development is kept alive.

We can only hope they make the right decision.