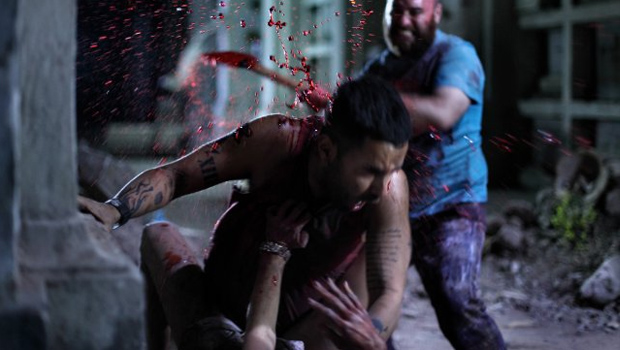 An American tourist in Chile and his newfound friends face a grueling fight for survival following a massive earthquake in this harrowing disaster film starring and co-written by Eli Roth (who penned the screenplay alongside Guillermo Amoedo and director Nicolas Lopez). Good-natured Gringo (Roth) and his two Chilean pals Ariel (Ariel Levy) and Pollo (Nicolas Martinez) are looking to hook up with some ladies when they happen across gorgeous Russian model Irina (Natasha Yarovenko) hard-partying Kylie (Lorenza Izzo), and Kylie’s straight-laced older sister Monica (Andrea Osvart), who agree to join them for an impromptu trip to Valparaiso. But the following night, as the music blares and the club gets jumping, the ground starts to crumble beneath their feet. With chaos in the air and Ariel seriously injured, everyone tries to keep their cool while seeking help for their friend. Little do they realize that this is the beginning of a nightmare from which no one can wake up, and when the inmates escape from a local prison and begin flooding into the streets, the initial shock turns to outright terror as roving gangs of convicts begin to rape, rob, and murder at will.