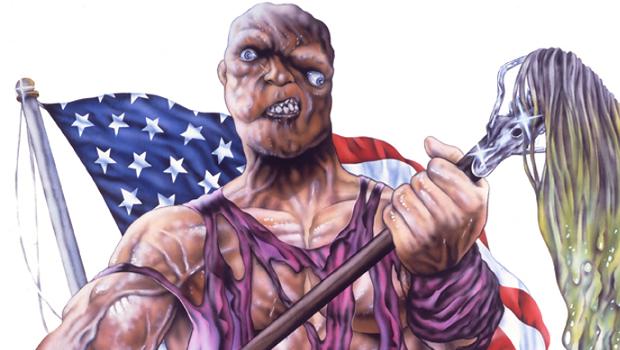 The first shock horror news spilling out of Cannes is that none other than Arnold Schwarzenegger is negotiating a leading role in The Toxic Avenger remake. When we say leading role, that unfortunately does not mean we’ll be seeing him as Toxie, originally played by Mitch Cohen, but it has been confirmed that he’ll be getting plenty of camera time in this revamp of the cult 1980s movie.

With a script written by Hot Tub Time Machine’s Steve Pink and Daniel C. Mitchell and Elysium Films attached to produce, International Film Trust are pitching their take on the facetious 1984 horror comedy in Cannes.

The original film, directed by Michael Herz and Lloyd Kaufman was a massive flop until it gradually picked up a massive cult following thanks to late night screenings, resulting in the production of three sequels, an animated series and even a musical. We’re guessing Mr. Schwarzenegger isn’t in discussions for the latter format, or would you like to see that? Let us know your thoughts below. In the meantime, here’s the trailer for the original Toxic Avenger movie.

UPDATE: A plot synopsis has now been released stating that the revamp will be loosely based on Lloyd Kaufman’s original franchise. Schwarzenegger will play “The Exterminator,” a former black ops agent who will train a high-school kid who gets dunked in toxic waste transforming into a monster with superhuman strength. Teaching Toxie to put his powers to good use, the two of them will “take on the lurking menace created by the polluters, and the polluters themselves.”