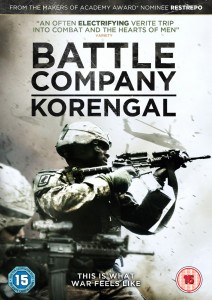 From the makers of Academy Award nominee RESTREPO, BATTLE COMPANY: KORENGAL releases on DVD and Blu-ray from 9 JUNE 2014 and to celebrate, we have 3 DVDs to give away!

BATTLE COMPANY: KORENGAL picks up where RESTREPO left off…the same men, the same valley, the same commanders, but a very different look at the experience of war.

From the writer and director of RESTREPO and the writer of WAR, Sebastian Junger spent a year with troops in Afghanistan. This is his experience following the 2nd Platoon of Battle Company on a 15-month deployment in the Korengal Valley of northeast Afghanistan.

BATTLE COMPANY: KORENGAL explains how war works, what it feels like and what it does to the young men who fight it. As one cheers when they kill an enemy fighter, another looks into the camera and asks if God will ever forgive them for all the killing. As one grieves the loss of his friend in combat, another explains why he missed the war after his deployment ended and he would go back in a heartbeat if he could.

Every bit as intense and affecting as its predecessor, BATTLE COMPANY: KORENGAL is an arresting insight into how war affects soldiers on the front line and goes a step further in bringing their experiences to audiences in a uniquely raw and honest portrayal.

To be in with a chance of winning, just answer this question: Which country can Korengal Valley be found?
a) China
b) India
c) Afghanistan

Fill in the form below.