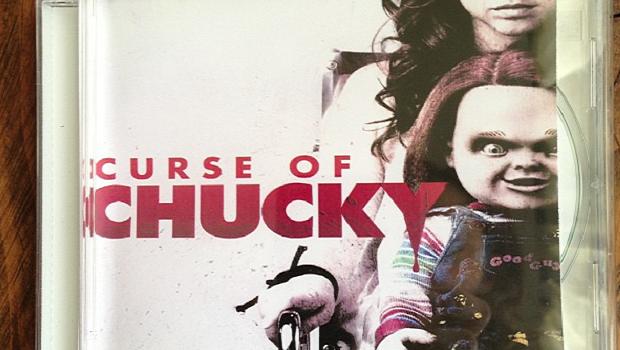 Star of the upcoming Curse of Chucky, Fiona Dourif (True Blood), has posted an Instagram photo of the soundtrack CD featuring herself tied to a chair with everyone’s “friend til’ the end” sat on her lap.

The designers appear to have gone back to basics with all of his Bride of Chucky scars absent. Another striking feature is how immaculately coiffured he appears on the CD artwork. We wonder if his hair will remain that impeccable throughout the movie as he wreaks havoc on his victims. Something says it won’t.

Fans of the franchise will be happy to hear that Fiona’s father, Brad Dourif (The Lord of the Rings), is back to voice Chucky, the demonic “Good Guys” doll which nefarious serial killer Charles Lee Ray possessed when mortally wounded in a police shoot-out. If that wasn’t reason enough to be excited, Don Mancini, creator of the 1988 original Child’s Play story has penned, directed and produced Curse of Chucky so we are no doubt in for some old-school Chucky goodness. This is supprted by the fact that Curse of Chucky is in no way intended to be a direct sequel to the tongue-in-cheek Seed of Chucky, despite similarities in the title. The producers of the film have decided now is the time to take the killer doll back to his horror roots rather than sticking to Chucky’s more recent comedic affairs.

The plot synopsis is as follows:

Following the gruesome suicide of her mother, young Nica (Fiona Dourif), who has been in a wheelchair since birth, must cope with her sister, brother-in-law, niece and nanny as they bid farewell to their mother. As people suddenly begin to meet gruesome deaths Nica realises that a mysterious red-haired doll which arrived in the post might just be the culprit. Chucky is back to settle a score that dates back over 20 years. The foul tempered, foul mouthed doll is back. Be afraid. Be effing afraid…

Curse of Chucky is slated for an October 2013 release date.