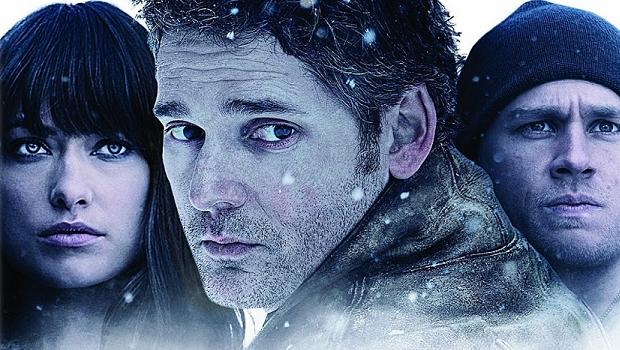 After winning an Oscar for best foreign film with The Counterfeiters, Stefan Ruzowitzky has turned to his first American project, Deadfall, bringing together an impressive cast. Entrenched in snowy landscapes, Ruzowitzky has surrounded the audience in a bitter cold atmosphere that’s as claustrophobic as it is endless with blizzards freezing our characters. Thanks to the cold atmosphere and the outlandish characters there’s something incredibly interesting here to toy with but being marketed as a straight out action-thriller is the wrong marketing ploy. It’s also the wrong way to take the film because there’s a much more interesting subject matter to be chiseled at and those are the characters. There’s a potential avalanche of emotions, disturbing pasts and real people, even in its exaggerated form.

As we join the characters, heading down a snowy road the car begins to flip and money flies everywhere – a nightmare for the characters from the start. We’re left with Addison (Eric Bana) and Liza (Olivia Wilde) who have blundered a casino heist and are now running to the Canadian border for freedom. The first act sees them split up to find a way across the border undetected or some people to use to get across. This leads Liza to Charlie Hunnam‘s ex-convict, ex-boxer character, Jay; fresh out of prison and already back into accidental trouble, on his way back to his parents’ house. If you’ve seen the trailer, you’ve seen them skip the first two acts mainly to show the third – even the plot synopsis on other sites skips to the third act.

Deadfall‘s bad marketing means the first two acts are tensionless. While we follow Liza’s bizarre, idealised and overly romanticised relationship with Jay, Addison goes around decimating all things in his path given his disturbing past. There’s no tension or suspense because we all know where it ends up with its ending leaving the first hour superfluous. Where it regains its traction is thanks to the characters who are all performed to interesting effect. This manages to escape the icy conditions of the gratuitous hour which preceded it by offering insight into a past that we know too little of. Driving the film forward are these performances and interesting people that get far too little limelight compared to the action we apparently crave. Even Hanna’s (Kate Mara) relationship with her sexist sheriff father is undercooked. Agreeing with the motives of either of those characters is a difficult one because of how underused, undertold and overly helpless they both assume each other are.

A shame because of the promising stories to be told which compromise for few thrills when there’s much more to be excavated out of the cold script of dark, twisted, dehumanised people, all searching for similar things. Relationships are complicated arcs and this has one which clunks to a false representation of love, infuriating the final scenes. Romance always seems to be the element that suffers the most in these films as they’re overdramatised and far too imminent to be even remotely compelling or relatable. Giving the script a Nicolas Sparks makeover is not welcome; incestuous back stories and sympathy for the characters who are faultlessly faulty is a more important aspect. Deadfall is by no means a bust attempt; snowy cinematography, top notch performances and an interesting idea are great positives but they all loom under the avalanche of ambiguity and promise. It’s almost wasteful of its ideas.