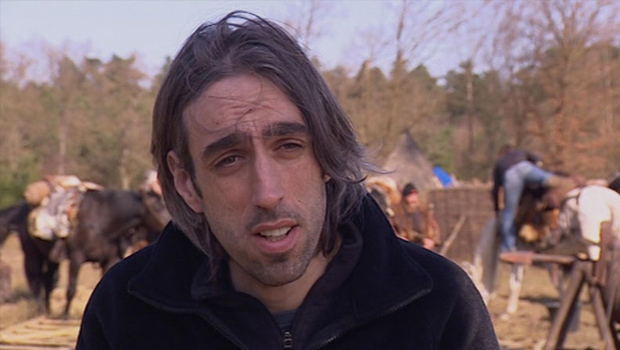 Yesterday Cinema Sauce spoke to The Seasoning House Director Paul Hyett all about the movie. Given his love for movies, particularly all things horror related, it was impossible to hang up the phone so we went on to ask him all about his ideal movie remake and films he would encourage our readers not to miss…

Is there a dream project for you? Something that is a bit of a pipe dream but one you intend on getting going?

There’s one particular project I’ve been working on for many years and we’re developing that which is called The Black Site. The Seasoning House has always turned to me as the first part of the horror war trilogy; where I take the horror of war and do it and try and make an interesting movie with horror overtones but set in the horror of war. Different characters, different warzones, different continents, different times and different periods. The Seasoning House was always the first one for me. The Black Site I was thinking could be the second part – it probably won’t be my second film but it’s something I’d really like to do at some point. People aren’t always interested but I really like the idea of doing a remake of a classic horror. Carrie, Evil Dead… I find reimaginings of old horror movies really exciting. Some people don’t like them and come up against but I think it’s really exciting to do reimaginings. Evil Dead was great, The Texas Chainsaw[Massacre]  – new one, the one with Jessica Biel, was great. I think reimaginings of old classics can only be a good thing. I’d love to do a remake at one point.

Which remake would you like to do if you could?

Umm… Oh God! Evil Dead‘s been done so not that one. Oh God, that’s such a hard question… Let me email you that one……

He did. This was the reply.

So, for my wish list to remake, well, Suspiria is such a cool movie and I think it is time for a remake and I feel now is the right time for a reimagining…  Also Phenomena could be a very cool remake to do too!

Also I would love to do the next in a chapter of something like A Nightmare on Elm Street (a really dark reimagining) or a [The Texas] Chainsaw Massacre (Going back to its harrowing roots)… Two of my favourite horror franchises when I was growing up!

Are there any films you’d recommend to cinephiles?

In the horror genre?

I’m really bad at being put on the spot because my brain flicks through 100 titles haha. For me, the turning point came when I discovered nu-wave French horrors. It really did have a big effect on me. Martyrs, Frontiers and Inside. I only watched them a few years ago and they were really refreshing and really new. I thought they were amazing. Really challenging, really brave filmmaking – Frontiers takes place in the French riots and it turns into this whole harrowing, dark, claustrophobic horror. Martyrs was really intelligently made horror that was really brutal, really harrowing but had lots to say about religion and ideology. Inside was just a really nicely directed, harrowing movie. Those three films really – in the last few years – did have quite an effect on me. I like films or genres that are really fresh and original rather than trying to make the same thing again and again and again. The thing with remakes is if you can make things a little bit fresh and original and provide a new take – anything that’s challenging and brave and wants to take something by the horns and try to do something a bit different –  I really applaud. I think those films really did go there.

Oh! I’ll tell you what I did watch recently which I thought was brilliant was Maniac.

I saw that, I thought it was really good as well. I was quite surprised actually.

I was blown away because I didn’t know anything about it. I thought it was just going to be Elijah Wood killer, scalping girls. It’s beautiful and artsy but it’s all in POV style which is really, really brave – especially the whole film in POV when your lead actor is Elijah Wood. It really got the feeling of menace there. The feeling of when a boy can’t get a girl, that frustration, but for him it was he could get a girl but he couldn’t help killing them, he couldn’t stop committing these horrible acts. You feel the frustration. It was one of those dark, harrowing movies that you really got into. I think that was one of the film’s from the last year that I saw that was really great. Everything about it was so well done. It could’ve been easily done schlocky or just a bloke. From the start where he stabs that girl, ‘don’t scream’, the way it was shot, the way it was handled – I just thought it was really good filmmaking.

It was gorgeous to look at as well which is quite rare for horrors nowadays.

Yeah, absolutely. Every little detail of that film was really thought through. Even from that stabbing of the knife to visual effects of those long pan-arounds, that woman’s scalp – it was just all really well done. Him wanting to have that romance with that girl, wanting to have that relationship with her and not being able to, you could really feel it in him. I thought his character was great, they could’ve done something cheesy and schlocky where you don’t have sympathy for him but in this one you did. You felt guilty for it because he was doing these horrible acts but you couldn’t help but feel the pain he was going through.

I think that’s a better remake than the original as well.

Just one final question, what are your favourite films?

I always go back to the one that was really important to me growing up and that was John Carpenter’s The Thing.

I love that film.

It was probably that thing – you’re probably around the same age I assume, we were probably brought up with the same films – all the slasher films which were great, all the creature films which were great, or the other movies around. There was something about The Thing that was nihilistic; it had a nihilistic ending, it had a nihilistic feel all the way through. You’re in the arctic, the place was desolate and dark, having no women, having no titillation of girls in bikinis which was really popular at the time. It was all character and what these characters went through and all that was happening. Aside from the make-up effects being outstanding, each character there was really important. Usually in horror movies you have one or two good characters but in that one you felt for all these men and you loved all their characters and you cared about them all. When it was all happening… I just thought it was brilliant. Brilliant piece of filmmaking. The music was great, the setting was great, everything about it. Somebody said to me the other night actually ‘name one film you wouldn’t change a single line of dialogue, a single scene, a single character, or anything about it?’ and the first thing that came to my head was The Thing. I couldn’t imagine changing anything about it.

The bloodtest scene is one of my favourites!

Ohhhhh! It’s just brilliant! It’s so tense, just from the first cut of the thumb that makes you wince to the whole tension of that scene. Them on the chair ‘get me out of here!’ It was brilliant. Even little character things when they’ve locked Kurt Russell’s character out: ‘What if we’re wrong?!’ These concepts these characters are having because in a horror movie if they think someone’s bad, they lock the door and go off! But these guys were having a conversation about what if they were wrong. Usually they don’t care if they’re wrong or not. There’s danger outside, lock the door and that’s it. There were conflicts, I thought it was a brilliant character piece; a dark nihilistic character piece.

It’s been an absolute pleasure talking to you.

Thank you! It’s why I love doing these interviews because I could just go on and on about film and eat up your phone bill quite easily. One more thing, the film comes out theatrically June 28th!

There’s the talkative, joyous director whose love of film has translated in film production. The Seasoning House will be screened at next months Bilbao Fant Festival and opens theatrically in the UK on June 28th as he just mentioned. It will then be released on DVD on October 14th.