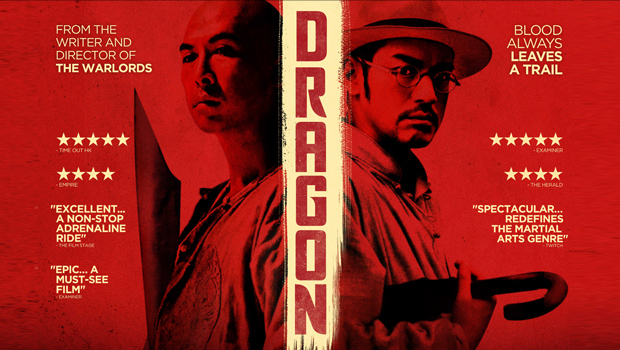 Acting usually comes down to moments of believability, ensuring that the emotions that should be portrayed are done so well enough to impact the audience. What usually slips through the cracks of acting is the great pain an actor might have to go through when performing stunts, choreography or any other important things that helps bring the character to life. Martial art performances usually get ignored or expected when people forget to appreciate the real art of the fight scenes. Dragon comes alive because of these scenes. The actors deserve a lot of credit for bringing their characters to life thanks to real moments of emotion and great fluid fights that arc with our main character.

Dragon, or Wu Xia as its titled elsewhere, is the story of Liu Jin-xi (Donnie Yen), a man who left his family from another village to integrate into a family. He married Ah Yu (Wei Tang) who was pregnant and had a son before meeting Liu after her husband ran away, leaving her alone. They live an ordinary life in 1917 China, where Liu provides by working in a store. His life changes when two bandits attempt to rob the store that he works resulting in a battle between the three that leaves the bandits killed by the bravery and luck of Liu Jin-xi. This results in Detective Xu Bai-Jiu (Takeshi Kaneshiro) investigating the unusual scene and incident, drudging up a lot that would be best left alone. Spoiling the surprises would be no fun.

As said before, the action scenes in this are spectacular and all of the action scenes were directed by Donnie Yen, the most marvellous aspect of the film. All scenes involving Liu Jin-xi are excellently choreographed to a perfect beat-by-beat even as we learn more about the character; the more we learn, the more we see him develop in the fight scenes as well as through the narrative. All of the fight scenes are superbly clear, every kick has the clarity thanks to Peter Chan’s clever dynamic framing that involves the audience without dizzying them. Peter Chan knows how to film a fight scene that absorbs, enthrals and impresses the audience, utterly engaging them in martial mayhem.

In contrast to a lot of films, the first act is by far the most intriguing of the three. It begins with something quite ordinary and spins it into something much more intricate. Investigations have become too routine but Dragon‘s investigation is piques your intrigue because of how off-guard it catches you. Investigations have taken too much from programmes like CSI: Crime Scene Investigation leaving it down to one tiny detail that’ll come back but with this it recreates the scene showing you how unreliable the original scene was; it starts feeding you bits of information which lock into place, completely changing the scene that you saw.

The first two acts have regenerated one of the most cliché ridden genres that has been continuously inorganically rehashed until it had been fervently butchered. Most recent films haven’t been notable, carrying only nice but typical choreography. This has created a great mythology, using it as a great way to enliven the genre to its wallop packing origin. Unfortunately, the third act falls into familiar territory filled with slogans of the genre but still adding genuine tension as if the characters are using their physiology knowhow to grip you. Tautly paced action flick with a kick that the genre needed to show its offerings. A well-weaved story that is impressive, expressive but slightly regressive in the final moments. It doesn’t hold it back, much like the punches within it.

Dragon is released on the 3rd of May in the UK.