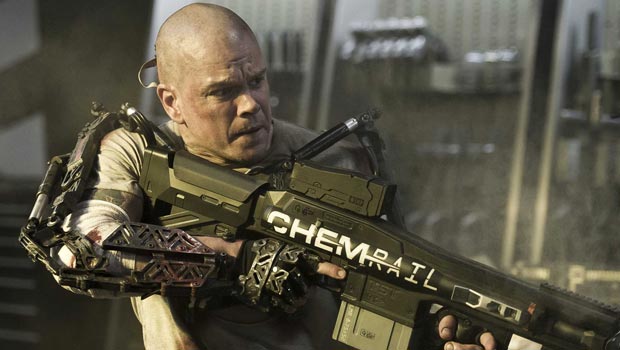 The year is 2154 and Earth has finally reached its logical end-point. The rich and powerful live on a luxurious, violently exclusive, giant bicycle wheel orbiting Earth: Elysium, a place where nobody gets ill, nobody is poor, and everyday life is someplace between peachy and swell.

Down on the battered old earth lie the rest of us – the other 99.999% of humanity. The bulk of the story takes place in an almost derelict Los Angeles, around a mostly Hispanic slum representative of the favelas and shanty towns of the third world. In this slum lives Max (Matt Damon), an ex-car thief now working in the local factory producing the very robots that control his every move.

In the first ten minutes we’re treated to a very concise bit of exposition that sets the scene for the rest of the film: a rogue spaceship breaches Elysium‘s security system and lands on its surface. Out flow a horde of grubby looking earth dwellers, running to avoid capture by the robotic police droids. We follow a mother and her daughter as they break into a house and find a ‘Med-Bay’. These are the main draw of the earth dwellers – they’re a kind of CT scanner that cures any illness in just a few seconds. The mother cures her daughter’s illness just as the droids storm into the room and takes them away for deportation.

The disparity between the rich and healthy up on Elysium and the rest of humanity on earth has, of course, created a small army of people who want to fight this inequality. These class warriors risk their lives to take the needy to Elysium to get healthy again; a practice that those in control of Elysium fight to prevent by any means necessary.

The defence minister, Jessica Delacourt, here played by the excellent Jodie Foster, is in charge of this violent and unpopular defence strategy, and after a bollocking from the president, she goes rogue, enlisting the help of the CEO of the Armadyne company, to make the bold move towards a coup d’état. The CEO, John Carlyle (William Fichtner) agrees to write a reboot code for the Elysium mainframe in return for a 200 year government contract for Armadyne. This will both cement his position as one of the most powerful men on earth, and allow Delacourt to take over Elysium.

Of course, everything goes tits up and gets interesting, as we’re dragged into a fantastically fast paced, surprising plot of deceit, revenge, humanity and sheer bloody-mindedness. The story could play out in the way one would expect, with nice clean act breaks marked by big story climaxes and action sequences, but it strays from that, laying out a multi-directional story that delivers more and more with each plot twist. In other words, Elysium is better than it needs to be. It goes above and beyond expectation and draws every plot thread together in a well-crafted crescendo that doesn’t disappoint.

The themes of the film – those of class, inequality, access to healthcare and enforced apartheid are heavy handed throughout, but not laboured. The story is merely set in a world where these things are more extreme than they are now, but the story itself holds its own against this. It allows the audience to enjoy the film rather than feel as if they’re being lectured on the evils of privatised healthcare, inequality and government corruption.

There is some obvious cross-over between this and Blomkamp’s excellent 2009 debut feature, District 9, but where District 9 focuses heavily on apartheid, Elysium casts a wider net on inequality throughout the world – the fact that class difference, access to aid and healthcare, elitism, corruption and so on, exist all around the globe.

There are some excellent performances too, namely the ferocious mercenary, Kruger, played with real delight by Sharlto Copley (District 9), as well as Spider, the unhinged leader of the class warriors (Wagner Moura). Damon is as solid as ever, and Foster is a class act all the way, as is Fichtner – surely the master of the understated, heartless bastard.

Elysium is a solid movie – packed with enough action, emotion, story, visuals and effects to satisfy sci-fi fans and novices alike. There’s a good slug of humour in there too, particularly when we see Max having to deal with the robotic parole officer (if you’ve ever had a job-centre interview, you’ll know his pain). At times it feels like a glimpse into the not too distant future of this giant mall we call a planet.