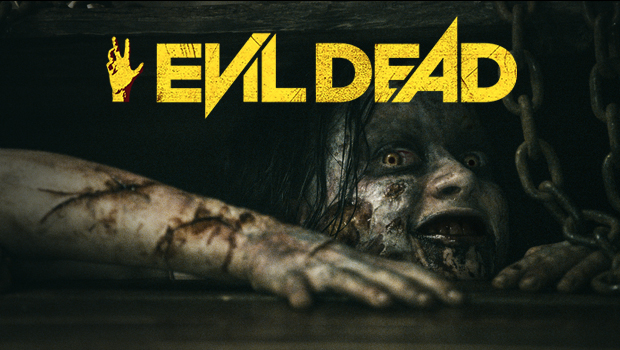 Fast paced horror with well executed gore. Director Fede Alvarez and his team have delivered a worthy addition to the Evil Dead franchise that should please fans of the original and the genre in general. Everyone else, approach with caution.

The Evil Dead series, which starred Bruce Campbell, began in 1981 when Spiderman director Sam Raimi made what is now thought of as a cult horror classic. Both Sam and Bruce are back on board this time round as producers, leaving newcomer Fede Alvarez to take the reigns as co-writer and director. Not so much a sequel and not really a remake either, the film appears to simply be an addition to the franchise and, to be honest, in a world of sequels, spin-offs, re-makes, retro-fits and reboots; I think we can live with that. 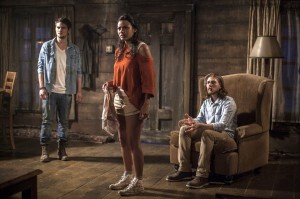 Not familiar with the original Evil Dead series? Don’t worry. The film is crammed full of enough modern horror movie tropes to help you navigate your way through. In fact, such is the films hesitance to push the genre forward, the uninitiated would be forgiven for thinking Evil Dead is an exercise in taking all the slasher, poltergeist, torture, zombie and exorcism films released in the last decade and churning them together. That’s not necessarily a bad thing however. One could even commend the filmmakers for keeping their approach and techniques close to that of the original, opting for a predominant use of practical effects over CGI giving the action a vivid dirty texture.

The premise is simple. Five young adults travel to (for the sake of argument) the middle of nowhere to spend a few days in a cabin surrounded by woodland where, a whole mess of badness ensues.

Very early on we learn that the group of friends are returning to this specific cabin as it’s an old favourite family haunt from their childhood. At the centre of this group are brother and sister, David and Mia. Mia who you may recognise as Suburgatory’s Jane Levy (I didn’t) is brought all the way out to this cabin to cold turkey and kick her drug addiction into touch. The relationship between Mia and David is a little on the fractured side due to his propensity to flee when times are bad. Nevertheless, David has returned to support his sister through her ordeal.

Trouble is, this isn’t the first cold turkey event the other friends have attempted with Mia. They inform David that from past experiences his sister will do and say anything to leave when cravings intensify. Basically, no matter what Mia might do or say they must stay and keep her in the cabin until it’s done. And there you have it – the critical justification plot point in place to pre-empt and debunk the cynics among us from screaming ‘why don’t they just [email protected]*king leave?!’ 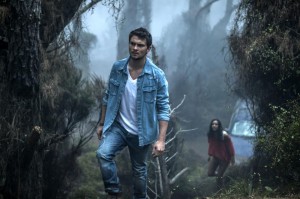 Not only that, I’ll even buy that upon seeing this wreck of a cabin – I mean a proper run-down, scary ass, flee ridden, stench infested, uninhabitable tat passing for accommodation; not one character at least uttered WTF?!, questioned the sanitary conditions or opted to sleep in the car. Fine! I’ll buy that too. Whilst I’m buying that, I’ll also buy that upon finding a book that was bound shut with barbed wire and kept hidden in a blood stained basement immersed in strung-up carcasses and in which clearly states not to be read out loud nor copied – the smartest character instantly proceeds to do just that. I mean you gotta buy into this right? You just gotta! Would you really want layers of subtlety delaying you from the oncoming carnage? Me neither.

Just so you have a hint of what to expect plot wise going into this film (although I’m not convinced it’s necessary) the cabin is bewitched, or possessed by an evil spirit if you will, that’s trying to get out and the book in question is pretty much key in triggering an awful lot of mayhem.

The posters sell this film as “The most terrifying film you will ever experience”. Fair enough, but, perhaps a more manageable task would be to set the bar a little lower and ask; is Evil Dead scary? Well, I can tell you now that there are scenes in this film that one couldn’t help but describe as horrific. Trust me, it doesn’t mess about. However, for my money, one or two elements do detract from this notion in terms of the overall experience.

First, there seems to be an over reliance on the volume of the soundtrack. By soundtrack, I’m not referring to the loud BANG spot-effect jumps that bug me in so many of the Japanese influenced horror films, although they are evident in this film as well. It’s the old school horror movie music that’s overused, particularly when there’s nothing as dramatic happening on screen as the wrenched up tones would suggest. As such, the desired impact of emphasising the terror instead relieves my mind back to hokey fairground trips around haunted dungeons.

More worryingly, when it looked like a second victim was being stalked for the ‘offing’ I realised I felt nothing. Well, a mild curiosity perhaps, but certainly no fear as such. So, rather than admit that I’ve been horribly desensitised from a childhood engrossed in splatter and gore, I decided to lay blame at the fault of the film. I simply didn’t care for the character. Not my fault. We’re about half way through and this particular piece of flesh actually hadn’t said more than 12 words up until this point. Seriously, I’m pretty sure I’m not even exaggerating. 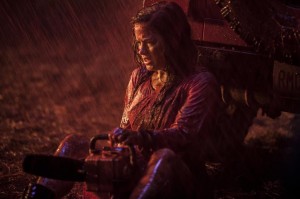 Despite this, once the film makes its way towards the third act some of the gears do begin to click into place and there’s a lot of fun to be had with nail guns and the constant use of gaffer tape. If your reasons for watching a film such as this are as transparent and as simple as wanting to see excessive amounts of gore, your bloodlust will be more than fulfilled. The violence on display cuts pretty close to the bone and whilst, in context of what’s going on, Evil Dead doesn’t venture too far into OTT cartoon territory – the characters ARE able to endure an obscene amount of punishment. Limbs are impaled and lopped off at such a rate that you’ll wonder why it took Aron Ralsten 127 hours to escape his canyon.

Overall, there’s plenty here for both fans of the originals and for the newer Saw generation to like. If, however, you’re one who engages with movies through the ideal that it’s ‘not what happens’ it’s ‘who it happens to’, you may have trouble connecting to Evil Dead. Yes, the back story of the brother and sister weaves its way in and out to reflect and resonate with the narrative but there’s little of interest or to empathise with here. Slightly disappointing considering the script was apparently doctored by the Oscar winning writer of Juno – Diablo Cody, I will admit to hoping for more boom between the characters.

Bottom line, this is a low budget £10 million plus (yes, that is low budget) movie that will likely, in the same vein as Saw and Paranormal Activity, crack the 100 million dollar mark in box office receipts. You know yourself. If buckets of blood and general well executed dismembering crazyness is to your own savage tastes then this is the badger for you. Those hoping for something more with the ride, even if it’s just a slight twist on proceedings, should hesitate (at least for a second or two) before handing over their well earned cash.