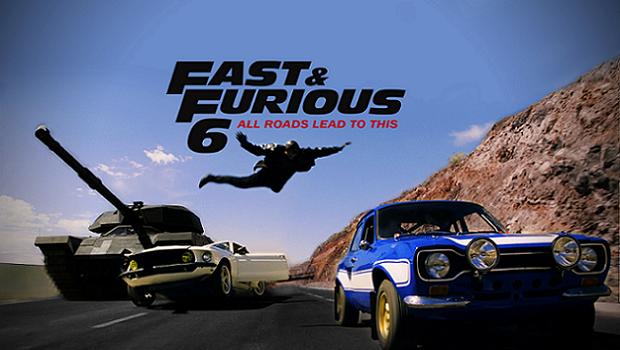 So Fast and the Furious 6 marks my first ever Fast and Furious experience at the cinema. I’ll be honest, I’ve never really understood the series, and I pretty much think I still don’t, but seeing a Fast and Furious movie with an audience and soaking up the crowd reaction was, pretty interesting.

The film centres on a group of car thieves (or ‘a crew’ as they like to refer to themselves) led by Vin Diesel. At the beginning of the film, Vinny D’s crew are separated and living their lives in hiding. They’ve all moved on and, looking to leave their life of crime behind, all seems well. That is until US law man The Rock (credited as Dwayne Johnson, but let’s face it; he’s still The Rock) shows up and brings the crew back together with a huge international security case that only they can solve. Why? Because they can all drive cars, really fast.

Naturally, Vinny D’s crew take the case and of course there are personal stakes for the team – movies today, ay? It’s all about emotional involvement and having a code. Thankfully, it doesn’t take long for the, ahem, “story” to get going and deliver one contrived reason after another to stage high octane car chases. But, before I slip any further into mockery mode, let’s get one thing straight; the action scenes in these movies ain’t easy to achieve and are damn impressive to behold. People will think ‘ah it’s Hollywood, big movie money, blah blah…’ but don’t kid yourself. It takes an awful lot of skill to choreograph and pull this stuff off. Of course, car chases aren’t the only type of action you can expect however. Vin Diesels crew go up against top ex-military personal in hand-to-hand combat and close quarters gun fights where, as you’d expect, they handle themselves quite superbly. After all, they can all drive cars really fast.

It’s in these gun fights and chase scenes that some really quite ridiculous over-the-top pieces of action play out. You’ve got people using cars to accurately catapult themselves into the air or, people falling 30ft on to high speed moving vehicles without a problem and well, you get the idea. It’s at these moments that I really noticed the audience around me. You see, at times during Fast and Furious 6, there are some generally amusing moments where the audience laugh with the movie, but then there are other moments, say a cheesy line or terrible delivery, where the audience are blatantly laughing at the movie. However, it was the big 80’s set-piece stunts where the crowd participation really came alive with OTT whooping, fits of laughter and even applause. Seems to me fans unashamedly appreciate that this stuff is bad but love it anyway. Maybe it’s that these scenes are a throwback to pre-superhero films where onscreen heroes didn’t need the excuse of spider-bite to perform inhuman acts, or maybe it’s just anything is a given as long as Vinny D’s crew all drive cars really fast.

Watching Fast and Furious 6 kind of makes want to go back and watch the first one. I’m interested to see if, in hindsight, the first outing at least had a pretense of trying to be a serious movie (just with a massive car fetish) because I can tell you now – this sixth instalment has all but given up the ghost of not being contrived. If anything, the film absolutely revels in what it’s doing, almost to the point of parody, and in a weird way; it’s kind of what made this Fast and Furious 6 a fun experience (that and the free beer on supply). If you’re tempted by this movie I probably don’t need to tell you that you should go in expecting things that belong well and truly under the category of ‘bonkers’. However, whilst I love that crazy action movies of this ilk still exist, and I’ll even admit to enjoying this particular instalment, it must be said I’ve seen films of this genre much better written and, I’ve seen much MUCH better performances from all the leads involved (including Vinny and The Rock). But I doubt any such reservations of mine will deter fans from seeing Fast and Furious 6. Why? Because the movie is full of high-powered, junked-up cars – and they’re all driven really fast.