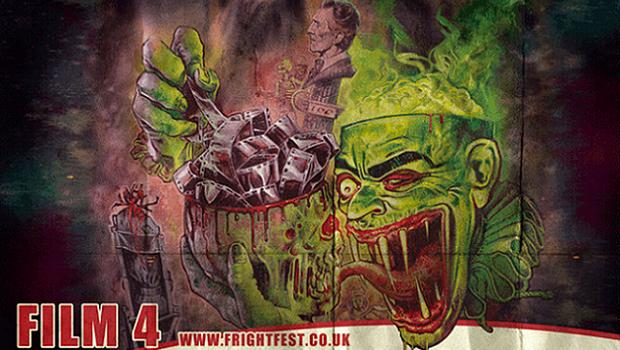 Graphic designer/commercial artist Graham Humphreys, the man and mind behind all FrightFest posters since the first event back in 2000, has now unveiled the primary artwork for FrightFest 2013.

This morning Graham said: “This year’s image plays with the skull of Yorick, in a parody of  Hamlet and all the attendant themes of revenge, murder, ghosts and  corruption. The death of celluloid is represented by the corpse in the director’s chair and the spools for brains. As it is the centennial year of Peter Cushing’s birth, his contribution to the genre is honoured with a bust and the passing of Ray Harryhausen is remembered with a glimpse of two of his creations”.

T-shirts resplendent with FrightFest’s iconic monster will be available to purchase as of August together with a limited edition hand screen printed poster.

For the very few unaware of the Film4 FrightFest, this is currently the UK’s biggest genre film festival. Originally conceived by Paul McEvoy, Ian Rattray and Alan Jones, FrightFest opened it’s foyer doors for the first time in 2000 at the Prince Charles cinema, intent on providing the UK with a horror fantasy festival of similar stature to the European festivals of reference, Sitges (Spain) and Brussels (Belgium). Since then, the event has become a community where audiences and guests alike travel from all four corners of the globe to savour the event’s unique atmosphere.

This year’s FrightFest will run from Thursday 22 August to Monday 26 August at the Empire Cinema, Leicester Square. The complete line up will be announced next Friday, 28 June with both full festival and single day passes going on sale 24 hours later. Individual film tickets will then go on sale as of 27 July.

So far we do know that this year’s festival will feature the world premiere of The Dead 2: India, directed by Howard and Jon Ford as well as a UK premiere of Big Bad Wolves, directed by Aharon Keshales and Navot Papushado.

Frightfest also keeps horror cravings at bay outside of the main August event with a special Halloween all-nighter, also at the Empire Cinema, Leicester Square, together with a regular two-day event at the Glasgow Film Festival every February. The organisation also holds special events, which, to date, have included Dario Argento at the Coronet, Drag Me To Hell with Sam Raimi, Hostel Day and Dead Day, to name but a few.

For all information on everything happing at the FrightFest camp head over to their official website or Facebook page.

We’ll leave you with the complete FrightFest 2013 poster in all its gory glory: 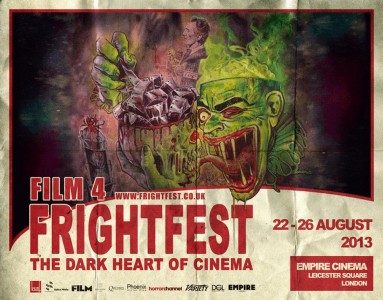