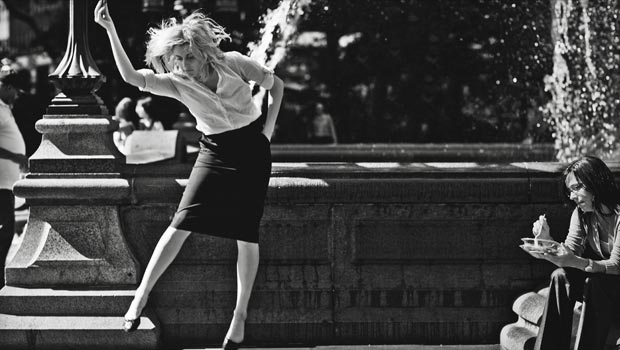 It’s Frances Ha as in Frances (Ha!), like her whole life and identity is a joke. Frances (Greta Gerwig) is a 27 year old New Yorker who hasn’t “got her shit together” yet, meaning her lifestyle doesn’t match her age. There are plenty of movies about grown men behaving like adolescents, but it’s nice to see the female version. Importantly, Frances is more than the Manic Pixie Dream Girl trope – she’s kooky, she doesn’t achieve much, but her motivations are her own.

Director Noah Baumbach is a master of the personal crisis, with Greenberg and Margot at the Wedding unafraid to deal with neurotic, unlikable characters. Frances Ha isn’t anything like as acerbic, but we’re on similar ground. The traditional midlife crisis may not be pertinent at a time when older generations have things so much better than the young, so the topic instead is the fading dreams of late-youth.

We enter at the point that everything goes wrong. Frances is living in platonic bliss with best friend and soulmate Sophie (Mickey Sumner), both drifting but content – aimlessness loves company. But then Sophie decides to get her life together and Frances is left stuck, having to realise that no part of her life is quite turning out as she intended. This sets up a monochrome meander of a movie, following Frances along a gradually descending spiral.

Anyone with a problem with black and white, I tell them to watch Manhattan – Woody Allen‘s definitive love-letter to New York being one of the most gorgeous movies ever shot. Frances Ha is sort of the anti-Manhattan, the same kind of B&W and discussions about art and relationships, but without the romanticised outlook. A typical New York existence is not a Bohemian fantasy, grind and disappointment is the more recognisable experience. This particularly resonated with me because I live in London and it’s horrible. Big cities are only good if you’re rich, for everyone else life is a cramped, lonely struggle.

From the previous paragraphs you might expect Frances Ha to be an unhappy movie, but it’s really not, the wonderful airy tone never allowing things to bog down. Credit is due to the superb editing, keeping the scenes flowing through gaps in time and location, and also Gerwig’s infectious performance as the titular struggler. The film definitely feels an equal collaboration between Baumbach and Gerwig, credited as co-writers (and now apparently a couple). They make a good team, Baumbach’s natural misanthropy softened by Gerwig’s sunnier disposition.

So it’s never a struggle to watch, but that’s not to say it’s a positive story – indeed, beneath the froth Frances’ tale is almost endless tragedy. It just keeps getting worse for her, an impromptu trip to Paris the cruelly picturesque low point. Things pick up a bit towards the end, but even these gains come with massive caveats. The negativity might eventually be alienating for some, but it was right up my alley. Happy endings are for sissies.

It’s time to retire the term “mumblecore”. It never meant a great deal in the first place, and now Greta Gerwig, the Duplass brothers, Lena Dunham etc are the indie-mainstream. It’s been a triumphant rise, and an encouraging sign that low-budget films are now a legitimate entry route for new artists. The gap is ever widening between the 3D mega-blockbusters and smaller, artistic films, and it’s not impossible to imagine them becoming separate mediums. Let the giants keep the multiplexes, the internet offers opportunities that the studios are too clumsy to grasp. In a summer of robots and superheroes, Frances Ha is a refreshing breeze.