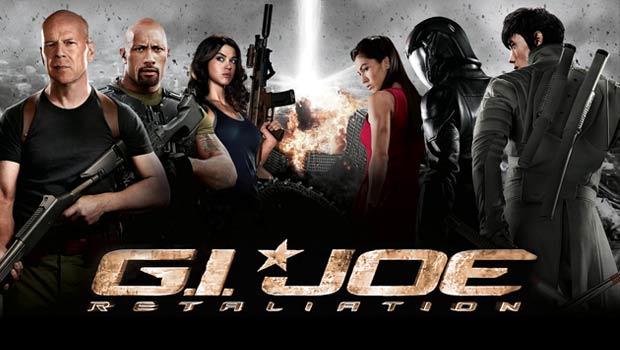 G.I. Joe‘s first outing on the big screen wasn’t a masterpiece or anything close to that. A film based on toys was always going to be a difficult thing to do and with that challenge in mind, it made a commendable effort to make it not so terrible. Although the first was filled with problems, it can be said that it was still a good bit of fun to phase out and watch. The first succeeded from its inherent silliness by even casting Marlon Wayans and Brendan Fraser to add some good comic relief in the action pieces and melodramatic world domination plan of the Cobra Commander. This has all been replaced with an attempt to become a dramatic effective piece when the audiences don’t want that.  But more than that it can’t handle it: it doesn’t have the writing, direction or anything to pull it off.

The American President (Jonathan Pryce) has been replaced by the master of disguise Zartan (Arnold Vosloo) thanks to the nanomite technology of the first film. As acting President of the United States of America, he obliterates the Joes, forcing them underground and bringing his agency, the Cobras, in as the agency of the government. Unfortunately, some Joes are too good to be taken down too soon and Channing Tatum’s Duke isn’t one of them. We’re left – as you can tell from the trailer – with Roadblock (Dwayne ‘The Rock’ Johnson), Lady Jaye (Adrianne Palicki) and Flint (D.J. Cotrona) left from the rubbles of the Joe destruction to fight the Cobras yet again. Along the way they have the help of mute ninja Snake Eyes and the original Joe (Bruce Willis). All ready-loaded to dismantle the Cobras then. Hoo-ha.

Ready to engage yet engaging with the characters is one of its biggest problems. By trying to be more than the first’s relentless action picture, it tries to add depth to the most one-dimensional of characters. Roadblock is an orphan with a family that don’t know he’s alive and he’s lost his best friend. This leaves them one moment for him to lash out at Flint yet never again. It’s the most pointless addition to the story of a man clearly devoid of real emotion. Then there’s Lady Jaye’s daddy issue because of how sexist he was but she could never make him proud of her or outrank him to force him to salute her. A problem all so apparent while she undresses and we see her reflection in the TV screen. Along comes Bruce Willis to solve that by calling her Brenda, asking her for a pen – as she’s the closest yet she takes a feminist stance – then at the end he’s the daddy figure whose opinion she has wanted to change. It’s formulaic yet in the most forced, minor manner that tries to make more from it. It’s more shallow than the puddle of the desert that they inexplicably escaped from. Flint, the most quiet and underused of them all, is feeling the guilt of having Duke (Channing Tatum) sacrifice his life for him and he’s in love with Jaye. It’s so basic that it’s like it has been sleep written.

Obviously you shouldn’t expect Shakespeare from children playing with human GI Joes but that’s what they’ve
tried to do. Adding weight to the weak, plastic surroundings the toys had then putting six foot people in it to make it more realistic. It’s cheap and boring. It’s like putting The Rock in a Smart car and making him drive full throttle: it’s not exciting. There’s no real suspense at any points because we all knew Duke would perish and it’s blatant when it’s going to happen. There’s no suspense because all of the characters aren’t disposable nor will they throw them away yet where were the best characters of the previous instalment? How did Storm Shadow survive? There’s no explanation to his return at all. The best character in it is Walton Goggins’ Warden who plays it completely over-the-top yet he’s the most genuine of all the characters. The worst is Ray Stevenson – the Australian villain from The Other Guys – who, as Firefly, tries to cover up his accent to never settle on one accent or tone or sound or anything.

That’s the problem with this. It never settles into the genre comfortably, it doesn’t respect continuity and worst of all it spends too much time trying to add drama to something that doesn’t need it. It’s a reboot sequel really that’s failed like Battleship failed. It doesn’t deserve the VFX it has within it – the extra year in post-production clearly helped that side of things. It’s an action film with not enough action nor any good action. The cliff-side scene has been praised the most, yet it’s weak like the rest of it being poorly filmed and stops it from being really exciting. The Raid showed what you can do with non-stop action and Dredd added 3D to that and made it enjoyable too but this went in the opposite direction, destroying the original’s intent. It could’ve grown from that and built a more fun and better film from it but instead they’ve flipped it on its head and created something that’s retaliating against the audience only.  Jon M. Chu’s direction is a massive restraint from a man not ready to have that big budget, it feels like it’s a studio film, not a Director’s. Uninspired performances, imitated writing, imperceptible direction all lead to something that’s aching to be better.