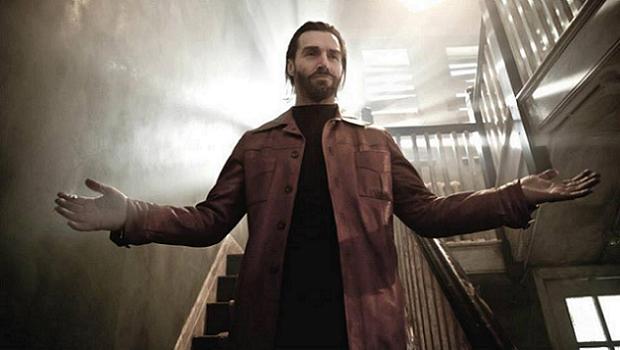 “I finished reading the script in about an hour and a half and I phoned Paul [the director] back immediately, and said I think you’re really onto something.” Kevin Howarth

The Seasoning House, directed by Paul Hyett, follows a young deaf mute girl named Angel, who is forced to work in a brothel after her family is murdered by soldiers during the Balkan War. This particular brothel deals specifically with supplying young prostitutes to soldiers and military personnel. Said den of iniquity is run by Victor, played by Kevin Howarth.  Angel is not a prostitute but an assistant to Victor, tasked with cleaning up after the soldiers whilst at the same time playing witness to all the horrors taking place. As you might expect, the soldiers who murdered her family turn up and Angel begins her revenge within the tight confines and crawl spaces of the seedy brothel.

The Seasoning House is touted as a “British horror” but Kevin Howarth disputes just how true that genre tag is to the film. “To me it’s not really a horror movie, it’s a harrowing journey of a young girl.” Its Kevin’s character ‘Victor’ who runs the brothel and decided that Angel would only serve as his assistant “She’s a deaf mute, she’s got a birth mark on her face and so not very useful for his brothel.” On the ‘face’ of it, the Seasoning House would seem to fit perfectly in the rape revenge genre (kick started by Wes Craven’s Last House on the Left) which was big in the Vietnam crazed 70’s. The plots of these films were always very simple; with the first half of the film dedicated to showing a prolonged brutal sexual torture by a group of men, and then the second half turning the tables with vengeance upon said men.

However it would seem the makers of The Seasoning House were intent on distancing themselves from like minded plots. “It’s very gritty and very real, there’s no titillation in it whatsoever. That was a conscious decision as well. I remember being on set one day in the house and looking down from upstairs as a take was going on with one of the girls in a bed. Her gown had come loose and you could see a bit of boob, and before the take got going again – Paul [the director] stepped in and said “wait a minute, wait a minute.” He stepped in and covered her up again and I was like YESSSS! I was really proud of that because it was like we’re going in the right direction because it’s not about that, it’s not about getting some vicarious thrill. You’ve got to get the tone right.”

Indeed it would seem that an intention to ground The Seasoning House in reality might not only serve in providing horror on a deeper level but also give the film a particular resonance. “The deaf mute thing in the brothel is also like a metaphor for what’s going on right now in the world. How many times have we opened the newspapers in this country at the moment and; we’ve got taxi drivers in Rotherham, we’ve got taxi drivers in Oxford and we’ve now got a Russian gang that was run by women that has just been broken up in the West End of London, and all this [sex abuse of young girls] is going on in our own backyard – so, what it must be like in a warzone (exasperated)…nobody knows. These girls have no one they can talk to or turn to, and so the fact that we’ve got a deaf mute girl is like a metaphor for all these girls – they’ve got no voice.”

From speaking to Kevin it’s clear he has a genuine concern for the issues dealt with in The Seasoning House and is able to converse on such matters with an engaging charisma and intelligence. “I’ve mentioned her many times in a few interviews – there’s a wonderful lady who runs the – it’s called the Helen Bamber Foundation, which steps up to the plate to get all of this sorted out. Emma Thompson is also heavily involved in exposing what is going on. Believe me, I would say what goes on out there is probably worse that what’s depicted in the film. I don’t doubt it. When I heard the stories of what that gang in Oxford did to some of those young girls; it was shocking! If we’d have filmed something like that people would be throwing up in the aisles.”

So how does Kevin approach a character enabling and benefitting from such horrific acts? Well surprisingly as it might sound, it seems his starting point is to try and relate to him. “For me, his objective is… when you play a character in any film, it’s all objectives; you’re coming from somewhere and you’re going somewhere, and then it’s a case of: what’s getting in my way? So for me his objective is ‘I’ve got to get out of here. I’ve got make as much money as possible and get out of here.’ He wants nothing more to do with it [the war].” As logical as that may sound, Kevin then describes Victor in a less, shall we say, flattering light. “He [Victor] is a Serbian war criminal on the run and he is a wheeler dealer. He’s the kind of guy that can get you anything – a snake in the grass, he’d sell his own grandmother if he could make a buck or two.”

Anyone familiar with Kevin’s work will know this isn’t the first character of questionable taste he’s played, so what is it that separates one villain from another? “It’s no secret that there’s a rogues gallery of characters that I’ve played, you know psychopaths and socio-paths and I understand why people hiring me as an actor think ‘Ah Kevin can play that very dark character.’ But, what I look for when someone sends me a script with a dark character is ‘Where’s the goodness in him?’ He’s somebody’s son, he has a mother, and he may even have a sister somewhere; so what’s caused this? There has to be reason why he’s like that. And, you’ve got to remember Victor is also in a war zone and war moulds people in a different way. We’re lucky in this country that we’ve never had a really full blown war on our home territory. You would become a very different person going through something like that. Also, you’ve got find what warms him. Even in the most horrific psychopaths there’s always something that warms them and it’s my job to do my own research on my character and I pride myself on turning up ready to rock and roll.”

Going into The Seasoning House it’s a safe bet that viewers can expect the setting to play an integral part in the tone and aesthetic of the film. “It’s set during the Balkan War, a little after the Sarajavo massacre and lots of things are going on that aren’t being reported. Its not flippant, it’s real and what’s being portrayed is brutal but you have to give it integrity.” Listening to Kevin it’s hard not to think that they’ve approached this film almost as a documentary or recreation of a specific event that has actually happened, but what about the second half (the main thrust of the film) – when the vengeance kicks in?

“You’ve got the character of Angel being chased in-between the floors and air ducts and narrow corridors. So the second half is a little bit of a chase film and it’s about [the soldiers] trying to get her and how she utilises anything that she’s got and, just her animal instincts to get away. It’s almost like she’s become a little animal in [the brothel], trapped in this place.” Hmmm – anyone else picturing John McClane crawling through vents? Not that that’s a bad thing, if only the makers of Die Hard 5 had pictured that before they got to work on blowing Moscow up.

Getting back to the initial point, The Seasoning House is touted as a horror film – no doubt it will be a disturbing experience, but does it really deserve that moniker? “It’s a brutal watch, but there is redemption in it. It isn’t torture porn and to be honest with you there’s only really two scenes that are really graphic, well, maybe two or three scenes that are really full on. BUT I think what gets to you, I can’t speak for every audience member, but I think what gets to you is the knowledge that in the background of all this you know that outside there in the real world this is actually going on. With some horror films that have so much gore and so much special effects splat in it – you’re so removed from it, but this isn’t like that. When somebody gets stabbed in this, it LOOKS like they get stabbed. It will stay with you. It’s definitely a film that punches above its weight.”

The Seasoning House is released in the UK 21st June 2013 and we’ll leave you with a trailer for the film.