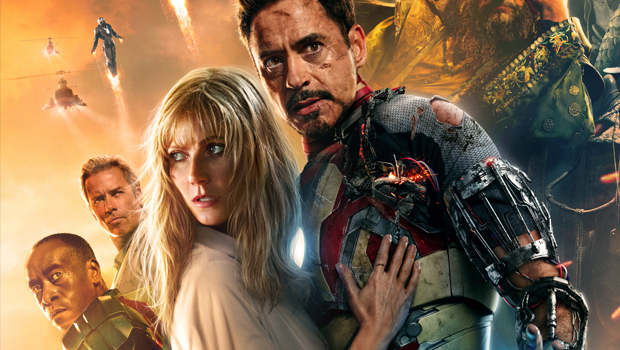 After Joss Whedon’s mammoth blockbuster The Avengers was released last year it was always going to be difficult for Marvels greatest heroes to go back to their own movies. How would they combat a climax like The Avengers or even, could they?  Iron Man 3 is the first of the stand alone films to make this attempt, rightly so, as Stark’s millionaire, playboy, philanthropist is probably the most popular of the line up.

Based, partly, on ‘Extremis’ written by Warren Ellis, Iron Man 3 see’s Tony Stark (Robert Downey Jr) in a rather vulnerable position to where we have seen him before. After his near death experience at the climax of The Avengers, Tony has become troubled. He suffers panic attacks and has a side order of sleepless nights to go with them. This has caused him to be fixated on his craft; he is terrified of loosing the one thing he cares about, Pepper Pots (Gwyneth Paltrow) and so is obsessively building as much tech as he can to protect her.

Enter, The Mandarin (Ben Kingsley). As the Mandarin consistently launches attacks on the American way of life it becomes clear that he is a ghost, the American government will not find him. Tony Stark is then goaded into responding to the mad man and in his vulnerable condition he calls him out, giving away his home address and inviting the Mandarin inside.

Meanwhile AIM (Advanced Idea Mechanics) director Aldrich Killian (Guy Pearce) approaches Pepper with a project which he calls Extremis and a way of reproducing severed limbs using DNA reprogramming. After a ropey history with Tony Stark, Killian proves to be more of a problem than initially expected.

Combining these three elements Iron Man 3 proves to be Starks most lethal challenge yet, a challenge that sees him, vulnerable, beaten and blown up.

Iron Man 3 is a worthy addition to the Marvel roster, primarily thanks to its script. Shane Black who also directed the film has really proved himself here as the film propels forwards with great confidence. This truly gives Downey Jr his wings as he pulls off this role better than ever before. It’s the dialogue that was mostly enjoyable here, never better than between Stark and a smart ass kid from Tennessee named Harley (Ty Simpkins). The relationship here is far from father figure however, Stark’s harsh realities are delivered to the boy with great comedic effect and Harley doesn’t fall short on the return fire.

There are some great British elements in the film, no doubt thanks to Black’s Scottish co-writer Drew Pearce with references to Dowton Abbey and Croydon bringing great laughs from the cinema. As well as this we see two British born additions to the cast, Rebecca Hall plays Maya and Ben Kingsley gives an outstanding performance as The Mandarin.

Iron Man 3 doesn’t always throw the metal hero in our faces like in the previous outing, Iron Man 2. In this film we see a lot of Tony Stark, this creates a very humanistic journey for the character. Yes the film has many great set pieces and countless explosions like you would expect but it also gives you more. It gives the characters a chance to interact, accompanied by some great writing and truly world class performances. Iron Man 3 is probably one of Stark’s best outings yet. The film doesn’t see a great exploration into the fractured mind of Tony Stark but gives us enough to understand and relate with the character making all the choices and dilemmas put before him all that more engaging.

Typically Iron Man 3’s post 3D conversion falls short of what it could have potentially been so I’d just avoid it all together and see the 2D version. It often makes some action scenes a little hard to follow. The narrative never really troubles or challenges you as an audience but it’s sophisticated enough to give the film a great personality, rare in a blockbuster such as this. Oh, and like most Marvel outings it is definitely worth waiting till after the credits for a little geeky snort and giggle.

is an independent film maker from the North East of England. He is a writer, producer, and cinematographer. He runs Juggernaut Productions LTD, a video production company specialising in everything from corporate works to short films.