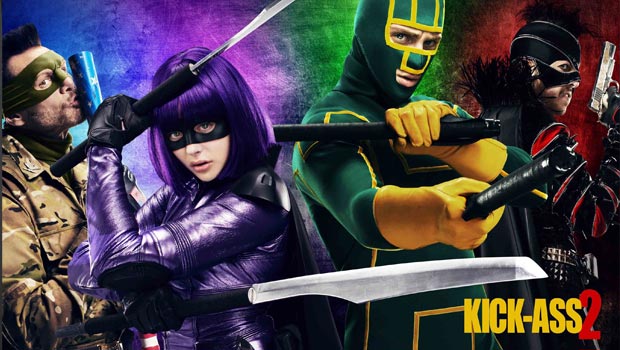 It’s not that it goes too far, there is no “too far”. A gadget that makes the high school Queen Bitch spontaneously shit and vomit – yes! Great! That’s exactly what a film like this should be doing. There’s a saying I learnt from Mark Kermode, “Post-modernism means never having to say you’re sorry.” So when Kick-Ass 2 stays ironic, stays as dark comedy, it’s fine. But should it become serious, it has to take responsibility for its message – and some of what the film is saying is just horrible.

The original Kick-Ass asked what would happen if an ordinary guy tried to be a superhero. Except it never explored this with any conviction, its setting no more realistic than any other comic-book entry. The observation it did make is that if superheroes really existed the results would be… messy. The film had tonal problems, trying to have it both ways as an outrageous comedy and a straight actioner. It remained entertaining mainly on the strength of its characters, and this is the first area where the sequel slips up.

The phenomenon driving the success of Kick-Ass was Chloë Moretz as Hit Girl. An 11-year-old, profane trained killer was sure to be a tad controversial, but the film recognised that this was child abuse – it wasn’t promoting the parenting style. Hit Girl is now all grown up, the trauma of her many murders manifesting as indecisiveness and intermittent weediness. Most of the time she’s aping Bella Swan – Moretz bites her lip so much I wondered if it was a deliberate parody. Meanwhile, Kick-Ass himself (Aaron Taylor-Johnson) has lost the clumsy optimism that kept him sympathetic, now he’s a junkie always looking for his next vigilante fix.

The sequel’s setup has Kick-Ass joining a superhero team, led by Colonel Stars and Stripes (Jim Carrey). Carrey has famously disowned the film for its level of violence, but what I’ve seen of his reasoning seems to be missing the point. The amount of violence isn’t the significant factor, it’s the context and meaning behind it – that’s why Saving Private Ryan isn’t considered barbaric. What’s concerning in Kick-Ass 2 is the blatant endorsement of vigilante thuggery, and Carrey’s character is at the core of this. The trailers suggested he would be portrayed as a lunatic, but the actual representation is far more heroic.

This movie should be a comedy, so the key question scene-by-scene is: if it’s not funny, then why else are you doing it? Consider an action sequence where a supporting baddie massacres a bunch of cops. It’s not funny, but you’re killing people with a lawnmower so it’s not entirely serious either. It has no plot significance, in fact it’s a distraction from an assault on a major character. Either its contempt for law enforcement is there to push the pro-vigilante message, or the scene is just for the visceral thrill of watching murder. The NYPD should picket this movie.

Kick-Ass 2 is not a comedy, it doesn’t even try for humour most of the time – it’s a straighter superhero movie than the Iron Man series. The supervillains might have silly names and ridiculous costumes, but their actions are absolutely serious, with atrocities that wouldn’t be out of place with Christopher Nolan‘s Batman (torturing a person to death, attacking a funeral). There’s a huge difference between gory, splatter fun and merely lingering on injury, and the film doesn’t get it right. Wherever tongues may be, they are not in cheek.

The final straw is Hit Girl’s third-act epiphany, declaring that even though her father destroyed her childhood and turned her into a monster, “[She’s] not so sure it was a bad thing.” What? Not only is that disgusting, it tramples all over the first movie. This is an unpleasant watch, enthused with a “might is right” ideology. Should I use the F-word? The film is probably fascist, but I think going there diminishes my argument. Can we just agree that murder is wrong?