Kris Kristofferson Talks Deadfall – Out May 10 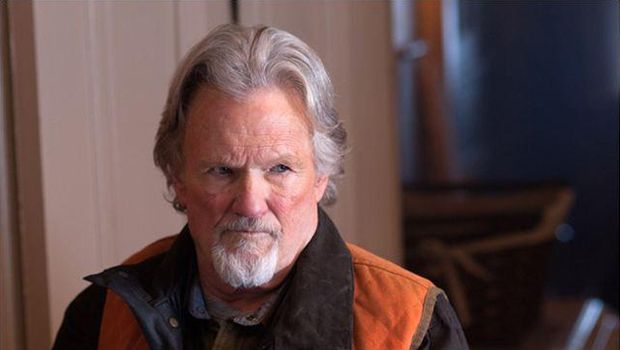 At the tender young age of 76, Kris Kristofferson holds a place in everyone’s hearts, whether it be for his acting chops or his musical mastery. Even after an elective heart bypass operation in 1999 he is still going strong with a plethora of film projects always on the go. Whatever time he has left over he takes to the road, playing live music as often as is humanly possible.

A fine example of his recent acting work is the film Deadfall where he plays the role of Chet Mills, husband of June Mills (played by Sissy Spacek), and father to Jay (played by Sons of Anarchy’s own Charlie Hunnam). Chet and the rest of his family find themselves accompanied at their Thanksgiving table by a brother and sister (Eric Bana and Olivia Wilde) as they fend for themselves in the aftermath of a botched casino robbery. Kris was kind enough to speak to us about the film, although he has been involved in so many projects since then that he did his utmost to recall his on-set experiences…

So this Friday sees the release of your latest film in the UK, Deadfall, with a stellar cast featuring Eric Bana, Olivia Wilde, Charlie Hunnam and also Sissy Spacek who plays your wife. I spoke to the Director, Stefan Ruzowitzky, who said that he was eager to cast you in this role as you were a very iconic, fatherlike figure. What was it that attracted you to this particular role?

Well *laughs* I really didn’t have much to do for this film except for just sitting at a dining room table but I mean it was really cool being able to work with all those involved in the project. This was especially true for Sissy who I have always admired but never had the opportunity to work with before.

That’s right. I know you were very keen to work with her. I have even heard that there is a scene that was eventually cut from the final film which involved the both of you. Apparently you were supposed to just give her a quick peck on the cheek but that ended up going a little bit further than expected. Can you spill the beans on that?

*Fits of laughter* I really couldn’t tell you what happened there. At my age a lot of these things turn into a bit of a blur and I honestly can’t remember what went on there.

Alright, I’ll take your word for it as the mind always switches to selective memory when it wants to. Going back to the script then. The film is certainly an ass-kicking action flick yet at the same time it has so much more to it. It is very clear that the dominant roles are the female of the species throughout, as is often the case in Ruzowitzky films. This is also the case with Sissy’s role. Did Sissy and yourself meet eye to eye in the portrayal of your on-screen relationship?

Well, to be honest, this whole idea of the dominant wife was very clear in the script and I also found that Sissy and myself both have the same approach to acting so we didn’t really have any differences at all. I was all for Sissy dominating me so I had absolutely no problems with that whatsoever.

So now you’ve worked with one of your favourite actresses, is there anyone on the long list of great actors that you still haven’t worked with who you would like to tick off the list?

Aww, listen, to be totally honest, I actually couldn’t care if I never do another film. I mean I’d like to work with any good actors…….. and even bad ones *laughs*. I’m just happy to be able to keep on doing something so enjoyable.

Yeah, considering your age and the amount of different projects you’ve got going on constantly, I don’t know how you manage it.

Well, I just love performing. I mean, in a couple of days we’ll be going on the road again, mostly performing music and we’ll be heading to Europe to do that some time this Summer.

Will that be to promote your latest album Feeling Mortal?

Well to be honest, I really couldn’t tell you. I just know that I really enjoy touring so that’s why I keep doing it. I don’t need any excuses to go on tour. The good thing about it all is that I’ve always enjoyed writing and performing music and I still do so I guess I’ll just keep doing it until they throw dirt on me.

Going back to the name of your album, Feeling Mortal, is this your way of telling us that you are starting to feel your ripe old 76 years of youngness?

Ha, well all my albums tend to relate what it is I’m experiencing at the time of writing. I’m 76 now so you become aware of the fact that everybody checks out eventually.

So you have no intention of retiring at all then? Does your age interfere in any way with the way you work now?

Well as long as I can still remember the words to my songs and enjoy performing then I feel very blessed to be earning a living that way.

And as far as future projects go, apart from going back on the road, I believe you have a festive film coming out this Christmas with Harry Connick Jr called Angels Sing?

That’s right but let me just check when that is coming out for you….

(He calls out to someone on the other end of the line with him to ask when that film is out as he cannot remember).

Yeah that’s right, it’s supposed to be coming out this Christmas.

Kris you seem to have so many things going on I’m not surprised you can’t remember them all!

Oh I do! The old brain isn’t what it used to be after all that boxing and football. It’s all catching up with me now but as long as I can still sing my songs I’ll still carry on.

Just one last question then. You can still remember your lyrics but, how do you manage when it comes to remembering the lines from scripts? You seem to be on the ball in all the recent films I have seen you in but is it getting harder with time?

Well no, not really. I mean, when I’m doing films it’s not like being in a play where everything has to be much more exaggerated in front of an audience. When I’m in front of the camera it is so much easier for me to become the character and create it realistically so I really don’t have any problems regarding the scripts.

Kris proves this point majestically in his latest role in Deadfall which the UK can catch this Friday, May 10th, at cinemas. We’d like to thank Kris for his time with us and we’ll leave you with the trailer for the movie.