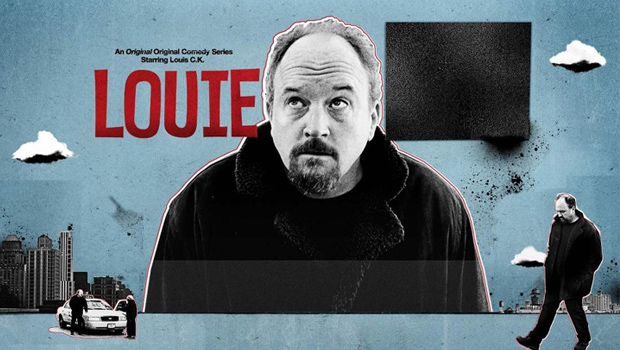 Comedian Louis CK‘s own television programme has finally made it to the UK thanks to the FOX channel and now the first season has been released on DVD. It’s a much refreshing addition to the sitcom world as it hardly feels like one, with a much more human touch, even in the most surreal moment of the pilot. It’s a great foray by the comedian into acting which he has done before but there’s something much more real and human about this creation than his predecessors. In this season he manages to balance comic moments with relevant commentary as well as stand-up gigs that are inspired by the weekly topic of the episode. It’s a different style of television comedy but it works so well; it’s the rejuvenation that makes this a much more welcome addition. It’s far away from the troubled 2 Broke Girls.

Louie is a caricature version of Louis CK’s stand up version but in no way in that other actors are exaggerated forms of themselves, it seems he’s gone the other way with a toned down, mellow, muted impersonation of himself. It follows Louie around on his journey through life which has him going through a divorce, two children to raise, an annoying mother, searches for sex and relationships and his current friendships. It feels like a documentary a lot of the time but it’s stylistically not. It’s reminiscent of quaint, quirky indie films with its simple style and editing style. Its narrative structure emulates that style too.

It’s a series that has been set-up really well and that’s definitely thanks to Louis CK’s writing and direction. He connects the narrative to his stand-up as to not be gratuitous space fillers to fluff out the episode with blatant humour; the entire show revolves around his life and how he finds comedy in it. There’s help from a supporting cast from the lesser known stand ups to Ricky Gervais to Matthew Broderick making a odd, distinguished cameo which satirises filmmaking. These are all welcome elements but Ricky Gervais’s moments are annoying and could be construed as padding; his addition feels inorganic to an organic realistic comedic construction. No doubt Gervais fans will love it and the other spectrum of anti-Gervaises will still not like him – that shouldn’t push an audience away from a refreshing comedy.

There’s plenty to love about Louie and not much to dislike which is great. For once, a tame comedy has managed to fit in laughs about relevant points. It seems comedy, in a lot of forms, always has to exaggerate to get ideas across to the audience. Some take it too far to the point where the audience lose the message but with this it’s hard to. There’s great moments of utter contradiction in people that leave you reflecting about how irritating and hypocritical people can be. It’s a great advert for sterilisation. Joking, obviously. Realism is what makes this comedy effective and in the pilot there’s a helpful escape helicopter – a great Pilot to sum up the entire tone of the first season. Originality is hard to come up in comedy but Louie is the most original comedic series of recent years. Founded on realism, it finds more comedy in everyday situations than over-the-top screwball comedies that litter DVD bins everywhere.  Highly recommended, a wonderful experience, if sometimes a little dampening as well as entertaining.