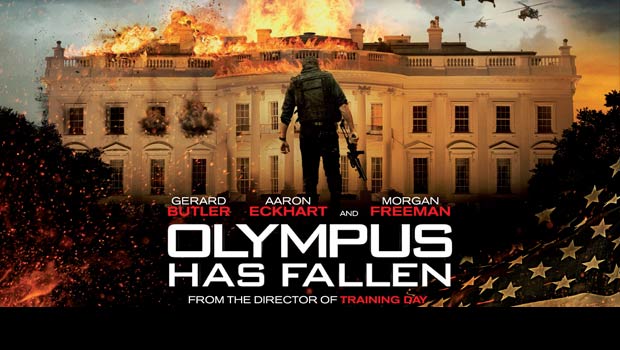 Gerard Butler has shaken off the “Die Hard in the White House” title that has come with his latest film, Olympus Has Fallen. Where White House Down embraced that comment, they’ve shrugged it off as its own film because Gerard Butler isn’t everyman John McLane. The truth is that this is very much Die Hard in the White House but with an ex-Secret Service agent instead of the New York cop. Some moments of it are beat-by-beat, right down to the cigarette. Although the opening is a much grander entrance than in Die Hard with a full attack on the President’s residence. A massive scale launch that, for once, doesn’t skip on the blood.

Mike Banning (Gerard Butler) is our incognito hero within the White House taking out the occupying North Korean terrorist organisation. This is the only contact the government have with anyone inside the building, utilising him to retrieve POTUS (Aaron Eckhart) and his son. His objective is to make up for the mistake he’s blamed himself for: the death of President Asher’s wife over a year before. They have to rely on him and his inside knowledge to scarper the hostage situation as well as hinder an even more devastating threat.  It was an original premise but the problem is that there will be a twin out later this year – starring Channing Tatum and helmed by the man with a grudge against the White House, Roland Emmerich.

There’s criticism that Antoine Fuqua’s filmography is quite the opposite of eclectic. He’s a genre filmmaker and he’s successful at it. He made Training Day which won Denzel Washington an Oscar as well as being one of the best action films around. This criticism isn’t going to leave after this destructive vehicle either. There’s always time for enjoyable cinema inside the art form. There’s a need for films that are there to thrill and entertain; which, on that ideal, Olympus Has Fallen is very successful. What helps is that the actors don’t simply just turn up, they’re clearly having fun within it too. This is escpecially the case with Gerard Butler who gets the most screen time to unashamedly bolster his image as American badass despite being Scottish.  Aaron Eckhart has fun as Presidential Two Face but Melissa Leo maybe takes it too far as Secretary of Defence, Ruth McMillan. Rick Yune as Kang is terrifying as no character is safe to grim, gruesome beating. Even Morgan Freeman enjoys being acting President Speaker Trumbull.

Olympus Has Fallen is unapologetic in its approach to be nothing but a popcorn flick. Why should it apologise for being badass, violent fun? It’s nice to see a film that clearly could have cut out the blood for box-office hasn’t. It’s surprising the studios didn’t push to lower the rating to get the youths box-office. This violence is its greatest asset as people are stabbed, crushed and torn apart by .50 calibre bullets. It indulges in its unabashed simplicity like a heretic. This approach keeps this on the right side of entertaining which is clear fun instead of insultingly mind-numbing. The problems it has stems from ghastly CGI which ruin the scenes they inhabit. In the opening siege, it’s not as noticeable until the Washington Monument collapses like a poor sandbox Playstation 2 game. It’s clearly rushed because of White House Down.

Its unofficial title of Die Hard in the White House is the perfect title for it. It borrows so much from the original Die Hard that it’s hard not to get distracted by beat-by-beat recreations. It even comes down to John McLane one-liners that thankfully succeed more than they fail but there are some awkward macho failures that deter again too. It’s easy to poke holes in this – whether it’s the countdown, the blatant patriotism, the CGI – but revelling in its fun atmosphere is a much more enjoyable way to look at it. It may be a weaker Die Hard replica but it’s stronger than Die Hard’s recent outings. It’s a giant explosion of patriotic testosterone that completely enjoys itself and, if you let yourself, you will too.