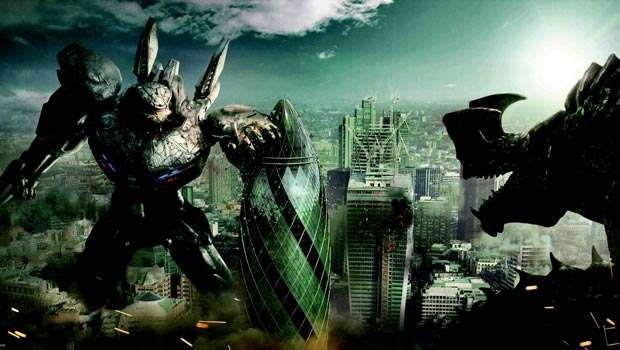 Giant robots, giant monsters, mega punch-ups in major cities, could you ask for anything more from a movie? Well, yes, if you’re an adult. Pacific Rim reaches theatres with anticipation at Batman-like levels, acclaimed on its concept alone. The film delivers exactly what it says on the tin; it’s just that the tin says Power Rangers.

From deep beneath the Pacific Ocean come mighty alien monsters known as Kaiju, their ferocity matched only by their urge to destroy famous landmarks. After the Golden Gate Bridge falls, the assembled forces of humanity decide that instead of advanced missile systems, they will build giant humanoid battle robots called Jaegers, each with their own name and unique fighting style.

The heroes of the piece are the Jaeger pilots, two-person teams mind-melded to each other and their war machine. It’s a cool-looking movie, and the design of the Jaegers is great – it has to be if they’re going to sell toys. It’s a proven model, Megazords were hugely popular in my day and they were due a modern redesign.

After an early showdown off the coast of Alaska, it’s a very long time before Kaiju and Jaeger trade blows again. The CGI fights scenes are expensive, so the runtime gets padded with high school dramas, macho nonsense and endless exposition. Charlie Hunnam as the everyman hero is no Sam Worthington, and when he’s spouting garbage about “drift compatibility” the pacing drags like Godzilla with a gammy leg.

With his Hellboy series, director Guillermo del Toro showed a predilection for irritating supporting characters. Pacific Rim continues this with a pair of squabbling scientists, played by Charlie Day and Burn Gorman. Their subplot seems significant but eventually goes nowhere, just a hook to hang a sequel on. Rinko Kikuchi is confused as a half weedy, half kick-ass character, whilst Idris Elba is good, though his big speeches lack weight.

As with any spectacle blockbuster these days, Pacific Rim comes presented in three glorious dimensions. Since 3D is a gimmick, to get anything from it you need to play to its strengths; thus the visual design making heavy use of holographic displays (which do look great). 3D does its best work with floaty particles, hanging in the foreground and making things look pretty – Avatar was full of them. Unfortunately, with Pacific Rim the technique is misapplied, ending up with water spray obscuring half the scenes.

As required by the premise, most of the all-important action scenes take place at sea, the colossi towering above the waves. Even when they make it onto land, everything still takes place in driving rain. Now, I don’t know whether to blame the 3D, but with the spray and the waves and the rubble, you never get a clear look at anything. I doubt I could pick out any of the Kaiju from a line-up. In short, the action isn’t good enough, which is a major problem when it’s the core of the film.

I understand the appeal of this movie, the idea does sound entertaining. But there’s not enough there to keep a cognitively-functioning viewer entertained for 131 minutes. Snakes on a Plane sounded good, so did Reign of Fire, with Christian Bale and Matthew McConaughey fighting dragons. Didn’t make them good films.

The best blockbusters are like Inception, intelligent films that respect their audience. Pacific Rim reads at about an Independence Day level: “Today we celebrate our Independence Day” becoming, “Today we are cancelling the apocalypse”. I‘d be more comfortable if Rim just came out as a children’s movie. The style is of a kid banging toys together making pew pew noises. Grown-up audiences deserve more.