Park Chan-Wook Discusses his First Foray Into Hollywood with Stoker 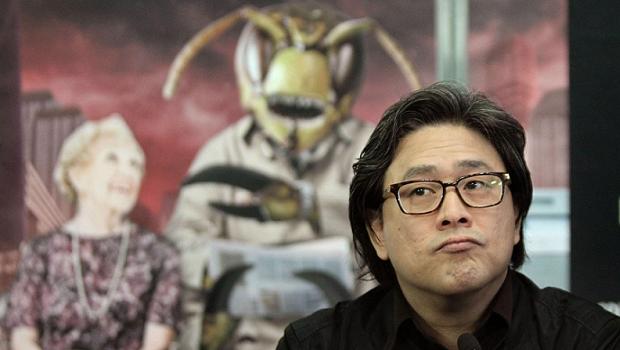 Park Chan-wook‘s English-language debut Stoker found its first fans at the Sundance Film Festival and has been wooing audiences around the globe ever since. Anyone familiar with his previous films will be well aware of his penchant for highly stylized visuals combined with violence of the most extreme kind. These vices by no means make for the most likely contender to make the jump to Hollywood but he accepted to direct Stoker in the belief this was the perfect foot in the door to Hollywood. Given his love for visuals and soundscapes he trusted that Wentworth Miller‘s script, which was not over-reliant on dialogue, was the perfect vehicle to reach western audiences. I got to sit down with Park Chan-Wook at the recent Fant Film Festival to discuss his first flirtation with Hollywood. Here’s what he, and his translator, had to say.

I found that Stoker tackles a conceptual form of vampirism. Would you say you used this as a metaphor to highlight the core subject matters in the film?

Absolutely. Many critics have cited many similarities it bares with I’m a Cyborg, But That’s OK and I see this as the third part in what I call the “Inhuman Trilogy” following on from I’m a Cyborg and Thirst.

I was of the belief you considered this as the second part of a “Coming of Age Trilogy”. Is that the case and, if so, have you already got designs for the third part?

Well, if you delve into my back catalogue then it falls firmly into two trilogies really. First there is the “Inhuman Trilogy” and then there is what I call the “Coming of Age Trilogy.” As you say, this is the second part of the latter and I certainly do have an idea for my next project and we will be filming that in Korea.

The gothic horror you have created certainly tips a lot of hats towards European surrealism. Was this something you intentionally aimed for?

Yes. That is something I strived to convey. Surrealism is something that has always intrigued and inspired me. It’s something I try never to veer from and I’m glad to say that it is ever-present in my films, to date. Having said that, I do try not to overstep the mark in terms of creating something that is not commercially accepted. Stoker specifically deals with the coming of age of a girl through visuals which I adorn with my surreal touches.

Talking of influences, I know that Hitchcock’s Vertigo was the film that convinced you to work in cinema. Wentworth Miller’s script certainly has a great deal of Hitchcockian thriller elements. Correct me if I’m wrong, but I believe you couldn’t make your mind up about whether or not to keep said Hitchcockian elements in the film.

Well, although I am a big fan of Hitchcock I do my best to not get over-influenced by other films and I certainly try not to let any influences shine through in my own films. Obviously it is very hard for them not too peek through some cracks but I do believe all the films I have made so far have been very unique and very me.

This same idea was true in the case of Stoker. I even asked to change Uncle Charlie’s name in the film as I felt it was too much of a hat tip to Shadow of a Doubt. My reasoning was that when audiences see such heavy influences from another director they get caught up in that fact and tend to see that single perspective of the film. This is always an extremely narrow perspective which prevents people from understanding the big picture. This is why I had my concerns about keeping it so Hitchcock-heavy. Funnily enough though, looking at the film now, I think the finished product is actually even more Hitchcockian than Miller’s original script.

A good example of this is Matthew Goode’s clothing and his interpretation. They both have a great deal in common with Anthony Perkins in Psycho. At the end of the day, I’d say I certainly have been very influenced by Hitchcock and it shows in this film more than I intended, but it was all very subconscious.

Just as Bong Joon-ho, your early films dealt with the social and the political yet you veered towards fantasy film. Would you consider returning to social cinema and what was it that steered you to the fantasy genre?

Well the change was never intentional, as such. The truth is that mythology is something that fascinates me. What I have tried to do is create a fantasy world that envelopes both political and social criticism. I would say I work on these two levels. Over the years you can see how I always add political colour to my films. This is very clear in my early works such as Joint Security Area, which deals with North and South Korea confronting each other. Then I moved on to a second period which was certainly somewhat more subtle, filtered by fantasy. Speaking of which, I am one of the producers of Bong Joon-Ho’s latest film Snowpiercer which combines both of these aspects.

I’d like to ask you a bit about the Stoker soundtrack as the soundscapes of your films play one of the leading roles throughout your work. What did Phillip Glass and Clint Mansell bring to the table that you were looking for?

Well I don’t like any specific music really. In my spare time I will listen to the classics such as Wagner. Despite that, I never use this kind of music in my films, basically because each and every sound depends entirely on the content therein.

I went straight for Phillip Glass because I felt India’s character would actually like something in this style. It suits her personality down to the ground – very organised, extremely pathological and, to a certain extent, autistic in nature. On the screen this is perfectly portrayed by means of her clothing and her bedroom. This is why I went with Glass. The melodies were not the crux here but rather the actual sounds themselves which perfectly brought out what I believe are India’s unique features.

When it came to Clint, what is most important for me, regarding music, are the textures and a sense of movement. This is why I like to use dance music in my films. Clint has this knack of portraying the exact texture and movement I was looking for with Stoker.

Based on previous films, you have never been one to hold back when it comes to filming scenes of a sexual nature. This is particularly the case in Old Boy and Thirst. Quite the opposite is true in Stoker. If you had shot the film in Korea do you think we would have seen more explicit scenes?

So, all in all, how would you describe the experience of making your first feature film in Hollywood?

Well, to be completely honest, I was very hesitant at first mainly due to the existing prejudices regarding Hollywood producers. They are seen as these bumbling idiots until you get to meet them and realise they are actually very, very intelligent and share such a love for everything celluloid. Lest we not forget that they are the driving force behind this business. I saw Stoker as a chance to reach western audiences with my first English speaking film. I had never worked with a script penned by someone else and I must admit that in the end I rewrote a hefty amount of Miller’s script.

Stoker opened this year’s Fant Film Festival in Bilbao and will be released on DVD and Blu-Ray in the UK on 1 July 2013.

We’ll leave you with the trailer for Stoker.