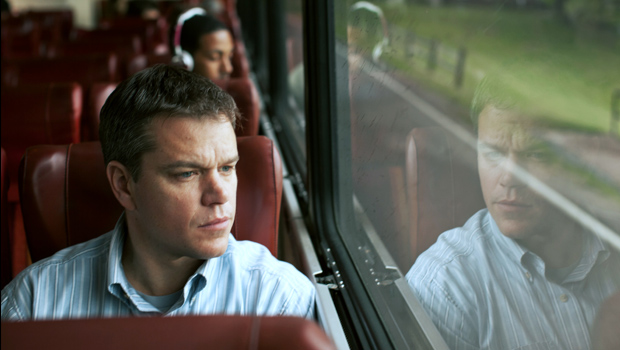 Promised Land (Dir. G. Van Sant) certainly won’t leave you with a patriotic tear in your eye, with your hand covering your heart whilst you mouth ‘Star Spangled Banner’, but it will leave you with a tiny, fuzzy feeling in your chest; or maybe that’s just indigestion.

The film focuses around the controversial issues of ‘fracking’, using a small, nameless, archetypal American town as prey for a natural-gas mining corporation named ‘Global’. Steve Butler (Matt Damon) and Sue Thomason (Frances McDormand) are the instruments Global use to attempt to infiltrate this quintessential American town, only to be confronted by an elderly man (Hal Holbrook) with traditional values (oh, and a handy PHD in mechanics) and a young, confident, environmentalist (John Krasinski), who set out to expose Global.

The movie’s cast help weld the film together with intelligent performances, and Damon, the film’s protagonist, brings a realistic charm to the role, aided by a shrewdly clever script. However, there is nothing that will make you remember the acting in the film, nothing that jumps out at you; it is so subtle that eventually you forget anything they did. There is no relationship built with any character, even Damon’s ‘Steve Butler’. As much as his character’s journey throughout the film is realistically acceptable, without some sort of emotional connection, why would you bother to care? Even with it’s quaint messages of community and obvious allegories of globalisation, this is the films downfall.

‘Promised Land has no “wow” factor in any sense of the word, and even the biggest drill couldn’t drag it to the surface from the bottom of this plot, but if that’s all you are looking for, then you’ve come to the wrong place buddy. ‘Promised Land’ instead moves at a steady, flowing pace (like a lot of Van Sant movies), and if you let it carry you along, you can enjoy it. The subtly charming script helps champion traditional American values, whilst you gasp with disbelief at the two-faced, money-grabbing conglomerate that try and destroy these conventional ideologies.