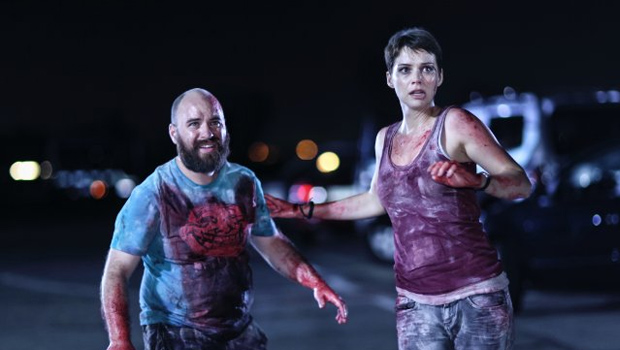 Guillermo Amoedo is a Uruguayan screenwriter and director who has worked on Spanish speaking shorts and feature length films since 2006. Now, recommended by fellow director Nicolas Lopez, he has co-written two English scripts with Lopez and Eli Roth for the upcoming films Aftershock, which also stars Eli Roth and The Green Inferno. The former is unleashed on cinemas around the world this Friday, 10th of May, and Guillermo was kind enough to spare a few minutes to discuss both future movies with us. Here’s what he had to say.

So you co-wrote Aftershock with Eli Roth and the film’s director Nicolas Lopez. How did the three of you get your heads together and come up with the story? I know you did indeed experience an earthquake a couple of years ago so did that play some role in the resulting script?

Well at first Eli and Nicolas had an idea to make a film together and it was actually Nicolas who started telling Eli a bit about the earthquake in Chile back in 2011. He told him stories of various peoples’ experiences and Eli basically thought it would make great material for a film. I then joined the team to write something for them based loosely on the actual earthquake but it isn’t by any means a biographical film about the events themselves.

So how would you describe the film as it blends comedy, gore, distaster movies and horror all at the same time? Has the film ended up as you had initially intented?

Well, it all starts off, not literally as a comedy, but it’s all nice and clean and it looks as though there is a safety net for everyone. That all changes as soon as the earthquake strikes and all the thriller elements come into play. For me, that is where the REAL movie begins.

There is a lot of gore and it does get very hardcore but it’s not gore for gore’s sake. Some of the stories are actually based on events that did happen during the earthquake that were very violent episodes so we wanted to portray that. I mean many prisoners did actually escape from prison and riots broke out so, in the end, our scenes of gore are not as exaggerated as they may appear to be.

Despite being an Eli Roth movie this is not another Hostel with people torturing others to get enjoyment out of it. The gore actually serves its specific purpose as we are showing some things that went on that were pretty gnarly.

Talking of gore, I know that you tried to keep as far away from CGI as possible with this film. Surely with all this gore and the earthquake scenes it must of been a pretty hard task.

Well, in the end, about 85% of the movie uses practical effects with the rest made up of CGI effects. I think it just works so much better without CGI because, in most cases, whenever a computer is used, especially with gory scenes, it tends to be quite obvious that it’s not real blood.

A lot of the cast were from Chile who you had worked with before. Did you already have those characters in mind when writing the script and did you always intend for this to be an English speaking film?

Yes, most of the actors here were already in my mind and it was only really the foreign actresses that came later on.

Regarding the script itself, it was always going to be in English but we began by writing the whole thing in Spanish. We then worked with a translator to make sure it was in perfect English. Then, once we started filming, we actually worked using both the Spanish and the English version as most of the cast and crew were Spanish speakers so it just made sense for everyone to have the script in their mother tongue to make sure the whole filming process ran smoothly.

I imagine you opted for an English script to reach a wider audience. This is often the case when it comes to American remakes of foreign language films. I know you are a fan of foreign horror such as Let The Right One In but what is your view on all these remakes that are getting made in recent years?

Well, I did see the remake of Let The Right One In and personally I just felt it was not necessary. These types of films are just made for the benefit of English speakers who don’t want to have to read subtitles in order to enjoy a film. I certainly understand why studios go down this route but for me it is a waste of both time and money, although there are some exceptions, but very few.

Alright but if you were offered to remake a film would you do that?

To be completely honest I really don’t think I would ever remake anything. I could say it would have to be a film that I really like but then I wouldn’t want to do that either in the fear of ruining a great film.

You also co-wrote another film between the three of you whilst shooting Aftershock. Said film is called The Green Inferno and I understand that you completed it in next to no time.

That’s right. I know that Eli had had this idea going around in his mind for a while about a group of New York activists who head into the jungle and get caught by a cannibal tribe. I started working on this idea with him and came up with quite a bit of material after he introduced me to his ideas and characters. In the end we managed to come up with the first draft script in about three or four weeks. After that we gave it a few rewrites and Nicolas Lopez then helped with the final rewrite about a week before filming began.

And has the film wrapped now?

Well it’s almost finished. I got to see a rough cut the other day and all I can say is that it is great. It’s an Eli Roth film so you pretty much know what to expect. It’s a thriller and really entertaining from minute one to the end.

Were you involved much in the shooting process for this film?

No, unlike Aftershock where I was on-set most of the time in Chile, this time round about 60% of the film was shot in the Peruvian jungle so I was only around when they shot certain scenes here in Chile.

Eli said that filming in the jungle was a lot tougher than expected but that it was all worth it in the end. Once you see the footage of the team’s work with real natives, who worked as extras, you will see how that gives the whole film a certain element of realism that you couldn’t capture any other way. It is actually amazing how some of the stuff comes across as though it were a real documentary. It’s really creepy when you see these cannibals with human bodies set in a documentary style film. The final effect is scarily realistic. I can’t wait to see how people react to this.

We’d like to thank Guillermo for speaking to us and we can’t wait for both films. Aftershock will be released this Friday and we’ll leave you with the latest trailer.