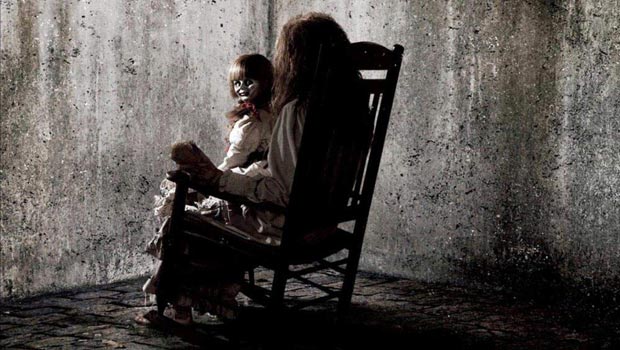 I don’t like being scared, I don’t find it a pleasurable sensation. It’s a weird thing watching a film wanting it to scare you – but I love films which make me feel sad, so I dunno. The Conjuring is determined to be scary, with a whole load of oogly-boogly all going on at once. Enough ghosts are thrown at the screen that at least one ought to spook you. The film isn’t good by most conventional metrics, but it did creep me out so I guess that’s something.

The Conjuring follows the “true life” escapades of Ed and Lorraine Warren, renowned paranormal investigators, demonologists, and – let’s face it – frauds. The end credits show a photo of the real couple, unsurprisingly looking like proper oddballs. Their cinematic counterparts are pretty normal folks despite all the ghost hunting, but then anything can sound reasonable from the pretty mouths of Patrick Wilson and Vera Farmiga. He’s an expert on the occult, she’s a clairvoyant, together they are Warner Brothers’ new horror franchise.

The fantasy stuff gets pushed a little too hard for a rational viewer to accept, with Patrick Wilson spending most of his time spouting some sort of claptrap. Why not destroy the unholy relic / tourist attraction? “Sometimes it’s better to keep the genie in the bottle.” Ah, alright then – but if things are so bad, why don’t they just leave the cursed house? No, the curse would follow them, “It’s like stepping on gum”. It seems the film does genuinely believe in demons, at least that’s what the closing captions would suggest. They’re not real by the way.

I don’t have a clue what the title is about, nothing gets conjured at any point in the film. The word has connotations of demons and spirits and all that, but The Deconjuring would be more appropriate. There’s a lot in the film that only seems to be there to benefit a sequel, particularly a possessed-doll subplot that’s completely irrelevant but gets to be the subject of the stupid final shot. The Warrens as portrayed here are too dull to base a franchise around, but established property plus easy template sounds like a winner.

Let’s call this a screams and giggles movie. The plot, theme, anything doesn’t matter, it’s all about the pattern of audience reaction: spooky, spooky, BOO, eek, oh did I scream how silly of me, giggle. Repeat until credits. It’s a good shared experience, best seen with a large cinema audience. I’d note that it’s possible to make a scary horror movie and still make great art – The Blair Witch Project for example is a masterpiece. But ah well, it’s fun, why not.