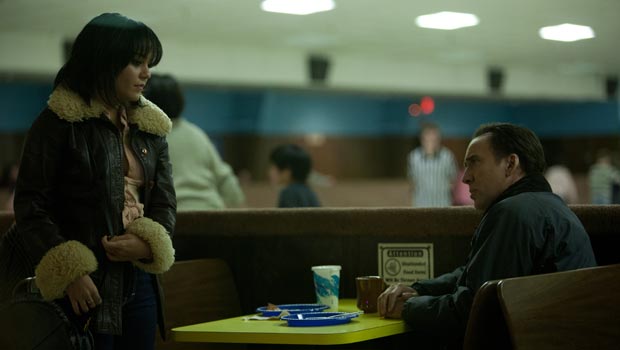 We’re in peculiar territory with The Frozen Ground, the debut feature from writer-director Scott Walker, based on the particularly grisly real-life case of Robert Hansen, found guilty of kidnapping and murdering roughly twenty young women in the 1980s. Given the gravity of the actual events on which the film’s based, Walker could approach the subject in any number of ways. Lamentably, “sensitively” is not one of them.

It’s not that the film isn’t entertaining. The execution is decent, and Walker’s shaky-cam direction is fast-paced enough to amp up the tension whilst not quite inducing motion sickness. We’re plunged into the action from the opening helicopter shot swooping across the Alaskan plains. Cut to police storming a log cabin and releasing Cindy (Vanessa Hudgens), one of Hansen’s victims, chained to a wall and weeping, before we’re following State Trooper Jack Halcombe (Nicholas Cage) on the hunt for Hansen (John Cusack). So begin ninety minutes that reek of bad taste, with a pretty average script to boot.

Credit where it’s due, the cast do their best – Cage aside, who since his Leaving Las Vegas days seems to have morphed into Hollywood’s go-to guy for roles that require a uniform, from fire-fighters to policemen, as if working his way through a Village People checklist. To be fair, it’s hardly Cage’s fault that the role of Jack gives him little to work with – he’s pretty much your stock-standard Law & Order cop, delivering clichéd assertions like “I’m the wrong guy to be getting in the middle of this” and “I’m two weeks from retirement.” That said, you can’t help but feel his approach lacks a little dynamism that could give the script a much-needed boost.

Cusack, by comparison, is impressive, revelling in the role of psychopathic Hansen, cold and callous throughout, and admittedly when Cage and Cusack stand off, the chemistry is palpable and effective. 50 Cent (Curtis Jackson) makes a somewhat confused appearance as a pimp, reminding us all he should stick to rapping. The real revelation is Vanessa Hudgens, making a stark departure from her usual appearances bleating Disney ballads at Zac Efron. Hudgens is Cindy, the Prostitute with a Heart of Gold and the only victim to escape Hansen alive. You tend to see this with child stars: a determined attempt to abandon their cutesy-pie franchise image by playing against type – coincidentally, Emma Watson‘s doing just that in The Bling Ring. Gone are the soppy melodies and cheesy smiles: Hudgens’ new role sees her gyrating round a pole in a squalid strip club and doing meth behind the beads in a backroom. Although these are the scenes the tabloids have pinned their focus on, it’s her exchanges with Cage that prove her potential. Whether the film will help her to be taken seriously as a Hollywood contender remains to be seen, but either way, it’s a welcome far cry from “Breaking Free.”

The problems with the script are simple – its simplicity. Whilst Walker’s style of direction is fitting for this type of story, his script is crammed with clichés and works like a paint-by-numbers of TV cop-drama dialogue. There’s the aforementioned Cage quotes, the phone calls in the middle of the night (“I’m on my way,” Jack croaks into the receiver,) and a disgruntled Cop’s Wife who worries about her husband’s safety in between putting their rarely-seen daughter to bed and washing dishes. The lack of character development on all counts is too much of a distraction for us to feel properly invested in anyone’s wellbeing, and some lines seem painfully convenient, planted indiscreetly with the sole purpose of shifting the plot along.

I’d be willing to overlook these errors if it weren’t for one crucial facet: this story is real. As such (and as the final captions remind us), these characters are real people, so the fact they all feel like supporting characters in Silent Witness is pretty inexcusable. Also, the story itself is horrifically disturbing, and Walker’s treatment of the case worryingly disrespectful. Before the credits roll, we’re told that the film is dedicated to the victims, whom we’re shown moments later in a cheesy montage of photographs, whilst a misguided choice of rock music plays in the background. This “tribute” seems so unsuitable that you end up leaving the cinema wondering whether you found the film entertaining or not, given its blindingly inappropriate finale.

All in all, this is a reasonable flick, if very familiar police-drama fare, and a must for fans of, say, the Millennium trilogy – though no one would blame you if you wait for the DVD.

James Morton is a writer, playwright, filmmaker and Durham graduate, working in TV. To date, he has written 9 plays and produced over 20 short films. He is currently based in London, working on a series of shorts and a feature length project.