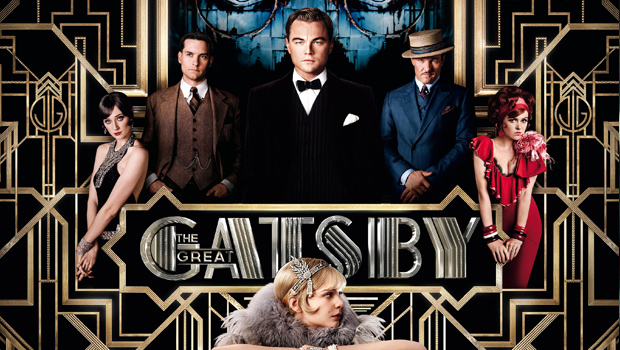 Adapting and luxuriating a classic novel, Luhrmann stepped up to the plate to knock out a literary classic hoping to make a classic film at the same time. Originally intended for a December release, the delayed, 3D post-converted modernisation of the book has now been released after premiering in Cannes – although it was already out in America. This change from an awards film to a summer blockbuster is a bizarre one and one that’s understandable after watching it. It isn’t an awards-worthy film, it’s barely memorable; it’s in a funk that never truly gets over the hump of converting lyrical literature into a more visual affair. Although it fills these gaps with nicely edited, scripted words flying up on to the screen and people talking quite poetically, it all feels like it works as a book but not a film.

Gatsby (Leonardo DiCaprio) is a rich socialite that throws extravagant parties for everyone in New York when no one really knows he is. Rather than following Gatsby, we follow Tobey MacGuire’s Nick Carraway as he tells and writes the story of Gatsby. We follow the get-rich-quick society of the 1920s where if you’re not white and middle class, you’re not anything. This is shown by Tom Buchanan (Joel Edgerton) who plays the most vile, toxic piece of rich hypocrisy while being worthless. Then, as we’re introduced to the characters drip by drip, we follow Gatsby and his quest to reignite his romantic entanglement with Mrs Daisy Buchanan, whom he’s loved but not seen in years.

Gatsby has working moments. It creates these extravagant sets littered with suave people as they all live the simple life of rich status. Garnering around huge parties without thinking of the consequences of the stock market, believing it to be an invincible tool for the rich to get richer. Liquor follows like water even though it is during prohibition in America. Detailed sets help add an atmosphere but then it goes over the top making it comically garish. It pulls back all sense of realism of the current time by – and this could be the 3D – pulling you out of the picture with what look like crudely crayoned production. Welcoming lavish at times but more irritatingly fake by being meretricious.

All left to be an hysterical, hypercoloured reality that can never make the moments as touching as they should be. There seems to be only one moment in the film that really succeeds at giving a tug which is more because of Lana del Rey softly singing over as strings emphasise the moment. Musically, it’s a bit all over the place; the songs are great most of the time but it’s hard to tell if they work, making them inconsistent. Contemporary music is a difficult thing to incorporate if you’re in the past, its inorganic is blatant; Jay-Z’s Izzo being played in a 1920s automobile filled with Moet is uncomfortably wrong.

Gatsby’s character has a great story once you get down to it, one which has him hype himself up and delude himself into living a garnished life that isn’t worth much else. It’s effective to the audience as we all, really, want to be a bit more, a bit better. An idea that an audience can and would love to relate to is given not enough exploration or exposition or care in the slower moments. Luhrmann can direct a party scene that is huge, colourful and fun but he can’t slow it down properly leaving the calmer moments more fraudulent than the sets and CGI.

Performances in this are all over the place. It seems DiCaprio has got a recipe for acting which goes to playing it charming to everyone, whispering in intense scenes and then shouting as a revelation to the character. This is distractingly formulaic in his portrayal to sometimes being as hysterical as the direction. Tobey MacGuire’s flat performance of Nick Carraway doesn’t give the lyrical words he ushers any strength, using them as placeholders to say in a flat, uninteresting manner. This ruins what could be some wonderful narration and dialogue that has been nicely lifted from the book. Tobey MacGuire wasn’t as bad as expected but it was no way a brilliant performance either. Carey Mulligan’s Daisy was a flimsy creation that wasn’t enough of a catalyst but just a flimsy, girly girl that is merely a namesake. Joel Edgerton’s Tom is the highlight as a brash bastard that is fittingly interesting, charismatic and loathsome.

It’s what you expect the film from Baz Luhrmann to be: all garnish without any real substance. He’s a substance over style director and that’s not changed here. Though argued as the original intention of the book it feels less satirical and more about the visuals which sometimes are incredible but other times hyperbolic. Stained in the darkened green of 3D glasses, the 3D is a poor post-conversion that’s distracting more than effective. Filming in 3D requires a different way of shooting which this hasn’t got. It’s all about the overstated sets that reflect the excessive lifestyles of careless uncaring people that unsympathetically clutter throughout. Problematic in its excessive, ineffectiveness that’s pacing never has you caring for the characters or really remembering. It’s about as memorable as the sparkles of an alcohol infused night-out that had you left squirming and retching cocktails into a colourful bowl.