The Place Beyond The Pines Movie Review 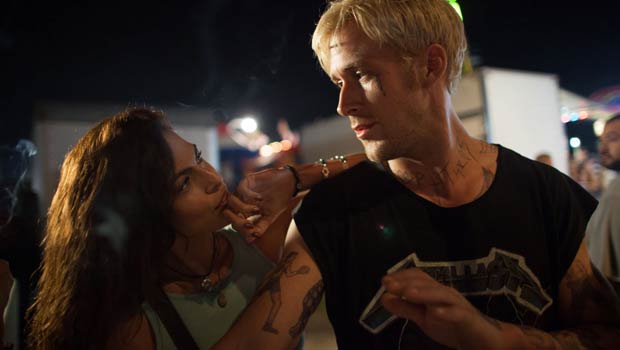 The Place Beyond the Pines comes after Derek Cianfrance‘s last outing, 2011’s heart-breaking anti-romance Blue Valentine that breaks people. The story of a couple at the beginning and end of their relationship with no coverage of the seven year gap. It was intimate, it fixated on them as a couple at their birth and their death. It’s one of the most real films that one can experience especially if you’ve had a similar experience that it can leave you completely harrowed for days and days. The Place Beyond the Pines is a much bigger film, scope and budget wise, considering it follows in an episodic fashion of three different stories that are linked as it passes from one to the other. This episodic direction makes it much harder to advertise it correctly and it hasn’t really; it seems like another cops and robbers but it’s far from it.

There are three different stories but it’s best to only know two of them. The first follows Handsome Luke (Ryan Gosling) a motorcycle stunt rider for a carnival that travels America riding in a metal ball with two other riders, narrowly avoiding each other. In Schenectady, New York, he meets Rowina (Eva Mendes) and after a one-night stand, he returns a year later to find he has a son. Wanting to do right by this surprise child, unlike his father, he wants to stick around, provide him, be there for him and father him. Being a mechanic in a small garage doesn’t pay enough which leads him to rob banks in marvellous, fluid one-take shots. Bradley Cooper’s story follows his policeman, Avery Cross, after an event that triggers a lot of changes to his views on the police and the corruption within it. The lives of these two cross in one panicked moment, the film feeding off this moment for the rest of it.

Instead of a traditional linear plotline that’s pushed along in exploitive dialogue, it’s instead handled with due care in slow, character building moments as we follow them around in their lives. It’s a slow-burning, intricate piece weaved to the characters as they carry us on, passing through each story like a tap on the back for theirs to begin. Cianfrance’s inspired style is heavily reliant on the acting, giving them the power to be their characters which are fully-fledged, not puffed out wastes of dialogue. They ooze their characters by the very way they do things, completely transforming into them, giving them tiny idiosyncrasies that say more about the characters than them directly saying it themselves. It’s effectively played being the highlight of the film until the awkward third act, or episode.

That’s where the film starts to go off the carefully constructed rails, breaking onto uncomfortable off-road territory that shakes the cool, calm approach off. Simply the characters cannot rival the first two. These abruptly change the pace from a much more collected pace, snorting some unwelcomed PCP as a rough change. That’s not to be confused with it being entirely bad, only it doesn’t live up the standards before it; it’s a burst of energy that might work more elsewhere. Where it darts from the dramatic side to a thriller ride that leads to some very tense moments. But tension isn’t wanted here; character exploration is. These people trickle interesting stories that deserve to be followed in closer detail.

It’s a film that could’ve ended without the third part but it was building and building for something, pushing something forward no matter how slowly. It’s a shame that the mesmerising performances are lost to the whimper of the final act. Derek Cianfrance likes ambiguity, leaving gaps in chronology in this like the last film but the gap brings up a lot of questions that would’ve gained a lot from further investigation. Poking and prodding it for more considering it’s permeated story and depth with ease. Qualms come from that but there are some bonuses but AJ (Emory Cohen – Skeet Ulrich and Johnny Depp’s lovechild) is a poorly written, MTV, ethnically confused cliché. So much so that there’s not an ounce of sympathy nor genuine charisma for the character that’s supposed to centre the third with Dane DeHaan’s Jason. That loss of character is pivotal to the loss of a film that is great but aching to be utterly fantastic.