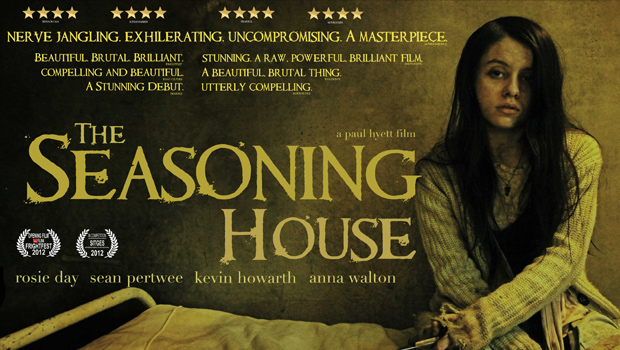 The Seasoning House is The Rape House.  If that’s not your cup of tea, that’s fine – but horror should be horrifying.  As a premise it’s artistically legitimate.  A cast of young brunettes are abducted and pressed into sexual slavery.  For the price of your ticket you get two on-screen rapes, plenty more implied rapes and several buckets of gore.

Set in a war-torn Balkans location, villainous Viktor (Kevin Howarth) presides over a crumbling brothel.  Our protagonist Angel avoids being raped quite so much by helping to run the house, preparing the other girls for “seasoning”.  Angel is deaf and mute, so doesn’t hear the pleas for help.  Here the film is extremely effective, though her potential complicity in the girls’ suffering never gets explored.

Angel is skilfully communicated by up-and-coming British actress Rosie Day, formerly a star of Bernard’s Watch (!)  It’s difficult to lead a film without having a line, but Day does a great job of expressing personality.  At night Angel moves around the house through the gaps between walls, crawling out of vents like a horror beastie.

Director Paul Hyett is best known as an FX maestro, and this, unsurprisingly, is the movie’s greatest strength.  Within five minutes a girl has her throat cut (gurgled with gusto by Gina Abolins).  As the film devolves into a by-the-numbers second half, there are all manner of stabbings and beatings, all graphically and flawlessly displayed.  It’s an impressive showreel.

Hyett has chosen a controversial topic.  Discussing rape is touching a live wire, and I wouldn’t be surprised if he gets some angry letters.  The detached perspective is no help – Angel doesn’t seem to care about the other girls until she eventually makes a friend.  The introduction of the boys from Srebrenica is a troubling device.  We don’t need to “one-up” rape.

This story would work better in a more “normal” setting, where the horrors of the Seasoning House wouldn’t blend in with the other atrocities of the Balkans conflicts.  It would also help the filmmakers, because this former-Yugoslavia looks suspiciously like the outskirts of London, complete with a preposterously English sitting room towards the end of the film.

The current buzzword in horror is “extremity”.  From Takashi Miike, to Saw and Hostel, to Pascal Laugier’s Martyrs (a clear influence here) there is the common goal to shock the audience with extreme imagery.  The Seasoning House shows ambitions in this direction, but is never quite extreme enough to truly provoke.  Given the subject matter this is probably the right decision.

The alternative route would be to concentrate thematically, and genuinely comment on the prevalence of sexual exploitation in conflict zones.  Unfortunately, these thematic possibilities are only used as background decoration for what becomes a very conventional horror entry.  Incredibly, The Seasoning House has even less to say about sexual enslavement than action flick Taken – aka Liam Neeson kills everything.

Horror is a funny genre.  So much of a horror film’s identity is in its relationship to previously established conventions.  The Seasoning House plucks all the right shrills.  The craft of Paul Hyett and his crew is of a high enough standard that their film deserves a recommendation, even if it misses any opportunity to elevate itself to the next level.

Paul Hyett proves British horror is a thriving force to be reckoned with.  He has shown with The Seasoning House how his FX skills transfer well to direction.  It has just been announced his next film will be a monster movie set on a train.  I’m looking forward to it.