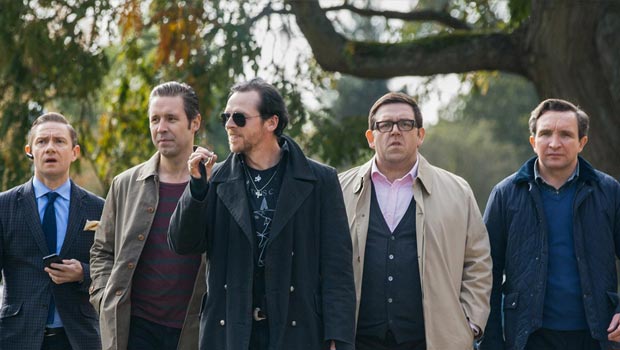 When Simon Pegg and Nick Frost made Paul and it was rubbish, that was ok, because it wasn’t an Edgar Wright film, and they clearly had a nice holiday across America whilst filming. Edgar went solo to direct Scott Pilgrim vs. the World, which was overly-frenetic but made with ambition and geeky artistry. The trio reunite for The World’s End, but some apocalyptic event seems to have obliterated their talent.

Shaun of the Dead was a phenomenon, the endless acclaim occasionally straining credulity (third greatest comedy of all time by one poll). It was a good movie, but I think more importantly it was a British comedy of which we could be proud. The follow-up, Hot Fuzz, was an even better film – a masterpiece of tone and genre awareness. They didn’t need to be part of a trilogy, but that’s how the world works these days. Omne trium perfectum.

For such proven masters of genre parody, The World’s End is curiously incompetent. The opening barely hints towards genre ambitions, the belated arrival of robot pod-people a jarring tonal shift. Basic aspects are done wrong – the fight scenes that overrun the second half being neither good enough to be straight action, nor funny enough to work as comedy. It’s not even particularly clear exactly what is being parodied, certainly no movie tradition as recognisable as cops or zombies.

Read any book on screenwriting, and it’ll talk about the importance of character motivation. In The World’s End, the motivation of Simon Pegg’s lead character is to complete a pub crawl. So significant is this goal, not even the killer robots can dissuade him. Just in case you’re not already disgusted, note that this isn’t a comedy goal, played as farce – no, it’s taken very seriously, with several heartfelt payoffs.

The dubious moral of the piece is a defence of the right to be a fuck-up. Pegg’s addict loser whines about being in therapy and having others decide his bedtime. Well yes, you’re a child, poisonous to yourself and everyone else around you. There’s a presumption that the audience will associate with this character, but he’s too irresponsible and way too annoying.

Spoiler conventions prevent me describing this, so you will have to take my word that the final scene makes absolutely no sense. It riffs on emotional themes absent anywhere else in the film, whilst undoing even the perfunctory character growth it had previously achieved. It seems to be setting-up for a sequel, but one completely different to this film. Please don’t guys, and by the way, why does Abraham Lincoln have a monkey head?

My theory is there was an earlier, good version of the script, but to get the movie made the filmmakers sold their souls to Big Beer. So, we noticed Nick Frost’s character is teetotal, what if he starts drinking? But he’s an alcoholic with 16 years sobriety, for him to fall off the wagon would be a tragedy. No it’s fine, it can just be a plot point – also, we don’t like the pub crawl being abandoning when the robots arrive, what if it was the most important thing in the world? But that would be ridiculous. Look, do you want the money or not?

Even in its best moments, The World’s End is no better than an average Doctor Who episode. It’s achingly disappointing that such an eagerly anticipated film would be so aimless. It’s an obligatory exercise, a film compelled to exist by past glories, but with no decent reason why it should exist. It’s sad to see this likable group misfire so badly – there is nothing to recommend.