This Is The End Review 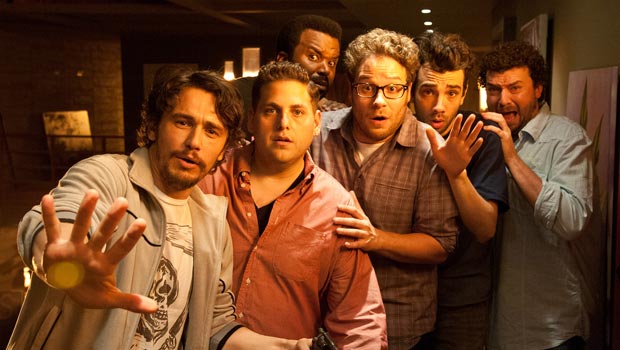 We all agree Seth Rogen is annoying, right? Something about his face, his voice, his laugh. And he’s made some bad movies. I mean, The Guilt Trip? How was that ever a good idea? I’m not an expert on the entrance criteria for heaven, but it can’t be looking good for him. But now Seth is a director, and wouldn’t you know – he’s repented for his sins with the best mainstream comedy since Anchorman.

It’s the metapocalypse. A host of Hollywood stars – playing themselves – are attending a party at James Franco’s house when the end of the world happens. The righteous are raptured into heaven; the movie stars are left behind. Surely it is easier for Jonah Hill to pass through the eye of a needle, than it is for a celebrity actor to enter the kingdom of God.

Rogen writes and directs with childhood friend and long-time collaborator Evan Goldberg. The film could have only been made by Hollywood insiders, with a procession of big names encouraged to poke fun at their own personas. To a certain extent, we are just watching a bunch of rich people hanging out, but personally, I’m glad to be invited.

The humour is crude and frequently smug, but no one can fail to be amused by a cokehead-Michael Cera being slapped in the face by Rihanna. It’s a movie lover’s dream, with constant references to the actors’ previous works, and especially Pineapple Express (which may posthumously be elevated to cult status). There’s a solid laugh at least every 30 seconds.

The core of the film’s success is in its characters. They are parodies, but close enough to what we might expect that there’s humour in the recognisability (Michael Cera is the example that goes the other way – exaggeration to outrageous extents). The affection between the actors also shines through – no one has had this much fun making a movie since Ocean’s Twelve.

Let me introduce the Murphy-Wilson scale of comedy actor respectability. At the dignified end we have Wes Anderson’s writing partner, a man who can lead a Woody Allen film, and produce exceptional performances in punctuation-averse fluff like How Do You Know. At the other end there’s Norbit.

A selective look at Rogen’s filmography would put him down the dodgy end with Knocked Up co-star Katherine Heigl. But dig a little and he’s got an interesting profile – successful comedian at an early age, mentored by the ascending Judd Apatow, always a writer first, actor second. If he continues directing films of this quality, I’m happy to write off his dalliances as accidental side projects.

So is Mr Rogen a Ben Affleck-style auteur in disguise? It’s a very loosely plotted film, surviving on its hilarity and audacity. You can’t imagine him directing Schindler’s List. Technically it’s impressive – the sudden outbreak of apocalypse is good enough to be disaster movie played straight. Some monster effects are a tad ropey, not sure if they’re a tribute to Harryhausen or just a bit cheap.

Nothing matters more than a film’s ending. Many comedies get too narrative trying to wrap everything up, and you leave the cinema having not laughed in 10 minutes. This Is the End‘s end is outstanding – completely out of left field yet the perfect fit. I was chuckling all the way home.

This is a “Have you seen x?” movie – word of mouth buzz is about to be off the charts. It’s certainly not the most sophisticated film of 2013, but it has a good chance of being the funniest. If you liked The Hangover, or Superbad, or Anchorman, watch this movie. Just one warning Messrs Rogen and Goldberg – no sequel.