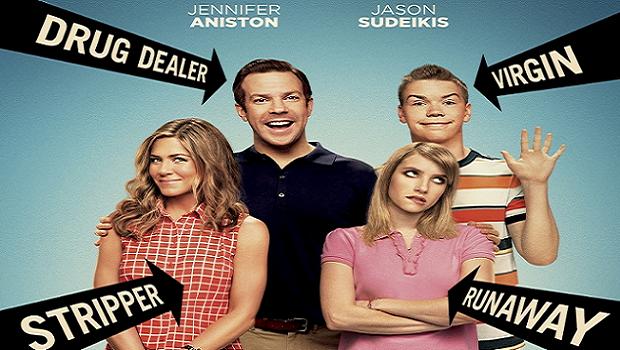 Warner Bros. has released a brand new red-band trailer for We’re The Millers starring Jason Sudeikis, Jennifer Aniston, Ed Helms and Emma Roberts to name a few. The film, directed by Rawson Marshall Thurber (Dodgeball) follows a small-time pot dealer selling to the likes of chefs and soccer moms, but no kids as he still has his scruples.

After getting mugged by a gang of street trash he finds himself with no money and no drugs and up to his eyebrows in debt with a drug lord. If he wants to settle his slate he must turn his hand to the world of big-time drug smuggling bringing in a shipment from Mexico. He can’t pull it off alone and convinces his neighbours, who include a cynical stripper, a wannabe customer and a tattoo covered, pierced-up streetwise teen, to help him out with what he believes to be a fool proof plan. A fake wife, two pretend kids and an oversized campervan later, the “Millers” find themselves on a roadtrip where all roads can only lead to misfortune.

We’ll leave you with the trailer to We’re The Millers which will be hitting cinemas on the 23rd of August.