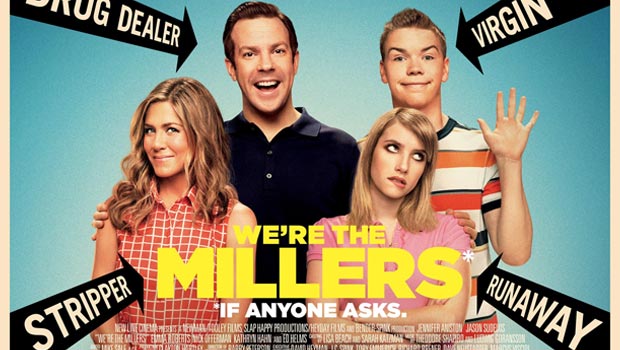 How does a movie fall so far short of its potential?

It’s a question that kept popping into my head when watching the characters in We’re the Millers plod through yet another scene loaded with asinine dick jokes and vaguely risqué banter. Even with a decent director, four writers, and a properly funny cast, we’re still left with a lazy, predictable, often dumb comedy that at times almost strays into hilarity, but all too frequently takes the easy route into adolescent penis material. It’s disappointing.

The story follows dime-bag pot dealer David Clark (Jason Sudeikis), who, after being beaten and robbed of his stash by some thugs, is brought before the local drug lord to explain himself. Clark now needs to repay his debt, and in order to do so is forced to smuggle a haul of marijuana over the border from Mexico.

Soon after, in a frankly bizarre scene, Clark witnesses a real life ‘Flanders‘ family get away with a parking offence, and has an epiphany. He decides he too needs a wife and kids in order to convey the innocent fatherly vibe and sneak under the border guards’ radar. But who’s going to go for that? Well, the sad, neglected kid from his building, his stripper neighbour, and the homeless girl he was robbed for protecting, of course! That bizarre scene turned out to be the inspiration for the rest of the whole movie. This does not bode well.
The kid is played by the up-and-coming Will Poulter (Son of Rambow), who gives a quality performance as the lonely, sad youngster the audience sympathise with. Jennifer Aniston plays Rose, his stripper neighbour – a good comedic performance but not suited to the character at all. Her stripper back story just doesn’t wash. And finally, the homeless runaway with attitude, played adequately by Emma Roberts (niece of Julia Roberts).

However, these aren’t the real stars of the show. By far the funniest scenes of the movie come out of the Millers’ interactions with the excellent Fitzgeralds, headed up by the brilliant Nick Offerman (Parks and Recreation) as holidaying DEA agent, Don, and his wife (Kathryn Hahn) and daughter (Molly Quinn). Their portrayal of a super nice, super friendly Middle American family is pitch perfect and brilliantly funny, and it gets better once their conservative facade is eroded to reveal a sexually charged desperation to reinvigorate their mundane sex-lives.

Sadly, the rest of the movie fails to match the quality of these scenes. There’s a great cameo from Luis Guzman as a corrupt Mexican cop who ‘prefers the company of men’, but apart from that, the rest of the gags fall short of being memorable or particularly funny.

The ideas are there, but the film just doesn’t live up to its potential, and I can’t help thinking about how much better it could have been had the story been dealt with differently. The idea of a drug dealer having to smuggle a tonne of pot across the border with a fake family really does lend itself to a great black comedy, especially when it goes wrong and the Mexicans are chasing them. But this? No. Nobody really gets hurt, there’s no feeling of danger and it’s all too soppy. Perhaps they should have taken a leaf out of Larry David‘s book: “No Hugging. No Learning”.

This is not to say that We’re the Millers is unwatchable. There are some great gags, but the fact that it takes the easy way out and brings nothing new to the screen is disappointing. It’s not good enough.