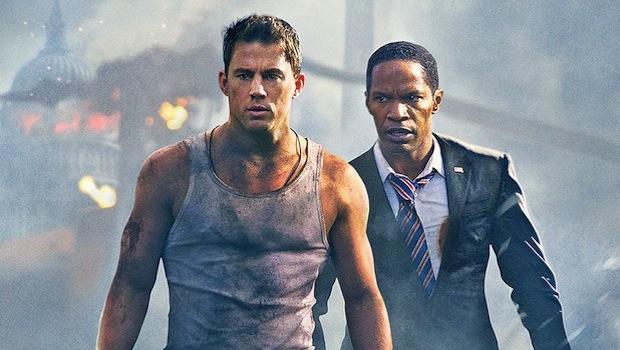 Are you thinking there’s a glitch in the matrix as you’re having a feeling of déjà vu? It’s not, it’s the Hollywood timing glitch.

It seems we’re shaking off the post-9/11 PTSD as audiences are now open to America being attacked again at the movies – The White House suffering the same fate twice in the same year. Most of the problems Olympus Has Fallen had pertained to its budget which lead to awkward, disconnecting CGI. This, with Roland Emmerich (Independence Day, The Day After Tomorrow) has amassed a much bigger budget which reflects the CGI and abundance of extras. Teaming with Sony was clearly a good choice for the writer James Vanderbilt (Zodiac, The Amazing Spider-Man) as it attracted a huge director who’s familiar with the destruction of The White House. If that wasn’t enough, it’s attracted one of the most sought after stars in the form of Channing Tatum (Magic Mike, 21 Jump Street, Side Effects) who is definitely a man of the moment. Where Olympus Has Fallen shook off the Die Hard similarities it clearly possessed, this has accepted the comparison and added a John McClane vest to Channing Tatum’s character. Channing Tatum’s John Cale is the only man who can save Jamie Foxx (Ray, Django Unchained) who is the President of the United States and stop a group of terrorists from seizing control of nukes, I’m guessing. This screams Olympus Has Fallen with twice the budget as well as Die Hard in the White House but with Emmerich behind the camera, Vanderbilt on scripting duties and a supporting cast of Maggie Gyllenhaal (The Dark Knight, Secretary), Richard Jenkins (most things you like) and James Woods (yes, him) then it’s hard not to be a bit excited for a duplicate that may surpass and surprise what wasn’t even a bad film.

White House Down will be hitting UK cinemas this September 6.