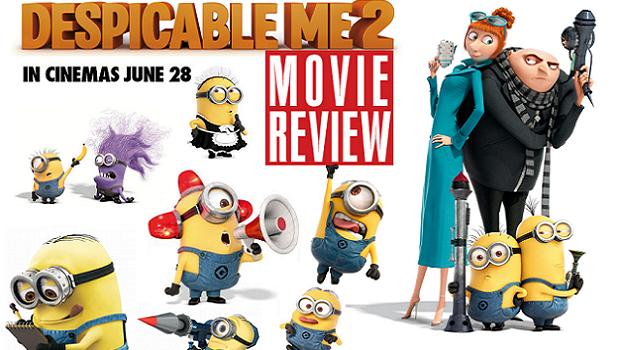 Despicable Me 2 turns out to be just as enjoyable as the original, which is good news for those of you who loved the light-hearted slapstick and cute, easily accessible characters the first time round. Not so good for anyone wanting the characters to be explored any further or the world created made any bigger.

What was so great about the first film was the surprise of new things, new gadgets, new societies, new villains and a fresh take on a main character. Much of what thrilled me about the second instalment was the same, though after a few minutes of lip service to the original’s innovation, with surprise tasers and an underground jam factory, someone somewhere along the line decided enough was enough, it’s time to get to the uninspiring plot.

So let’s get down to the main plot device: a villain steals a super-serum. This catches the attention of the AVL (The Anti-Villain League) the face of whom is the lovable Lucy Wilde (Kristen Wiig). They decide it is time to turn to everyone’s favourite Bad Guy turned Single Dad, Gru (Steve Carell), to Help Save The Day. The flimsy reason for Gru’s being employed is that remains of the chemical have been found in a mall which Gru must infiltrate because only he knows what it is to look into a villain’s eyes and know evil and it could be ANY one of the MANY shop own… Oh wait, okay it’s that guy. Whelp. Glad we got that sorted.

We then follow Gru in his attempts to gather evidence with side plots of inevitable romance dished out to Gru and his eldest daughter Margo (Miranda Cosgrove) respectively. This of course is all interspersed with short comedic breaks with the bumbling, inane, yellow minions of whom there are so many. I personally found these interludes boring and a cheap excuse for a laugh, but they also might just be exactly what make kids want to see this film, not to mention the fact those minions sure are marketable.

The theme of love and partnership is strong in this film, which is a shame because it serves to crush one of the most interesting messages I thought this film was sending me, namely that one CAN be a single parent, one CAN provide all the love a child needs without a spouse. However this is not the case, Lucy Wilde, a once promising character is, via a predictable ‘will they won’t they’ story arc, reduced to the damsel in distress and though at one point the film tries to convince you they might not actually get together, like the children in its audience, the film lacks the self-restraint to see it through and instead there’s a wedding at the end.

The presentation of Margo’s blossoming relations is similarly worrying. This subplot spends more time dealing with Gru’s inability to accept his daughter’s new relationship than it does on the young lovers. It smacks of the message ‘trust no man but your daddy’ and is not given any space to resolve itself, with an extremely abrupt, inevitable conclusion.

These romance arcs are indicative of the films wider attitude towards female characters. Other than Lucy, women were presented as something to be mocked, scorned and avoided. Any interaction the characters had with women involved at some point exaggerated, sometimes vindictive, slapstick violence, which the film wants you to laugh at. Now, I’m a fan of slapstick violence, I’m just not sure how I feel about it never being aimed at any men during this film.

Other than that possible dark undertone, and it’s insistence at being predictable in the most unsatisfactory ways Despicable Me 2 maintains a lot of what made the first film such a hit, great quotable characters (especially in the youngest daughter) and moments of genuine comedy which had the audience laughing openly.  I hate to say this in a way that implies this film has a right to be viewed with lower standards but, I have to remind myself that this is, and was meant to be, just a kids film.