I Give It a Year Review 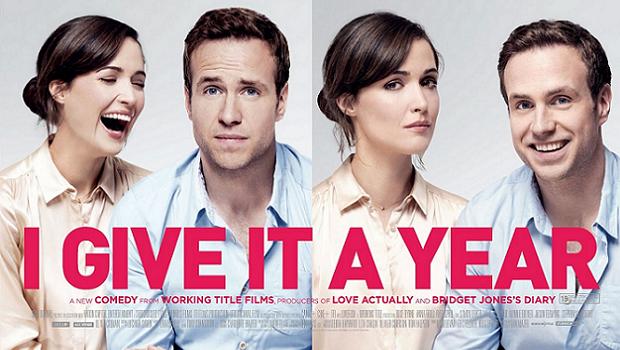 British romantic comedies usually suffer from the Hugh Grant problem – either by having him in it, being himself, or having someone play his character. Thankfully, I Give it a Year doesn’t commit this as that would just make it insufferable. Instead Dan Mazer has sculpted a script which manages to pack standard schmoltzy humour with some Borat and Bruno inspired comedy edginess that serves a refreshing surprise. Romantic comedies suffer insufferably from the problematic clichés that are inescapable. Some of the regularities have been replenished and replaced but it’ll never shake off the boring predictability of an obvious arc. It’s hardly romantic, sometimes tragic but it’s thankfully comedic.

Josh (Rafe Spall) and Nat (Rose Byrne) met, fireworks lit up her face, blowing up their relationship (sorry folks) which flourished with a bang (stopping is difficult) seeing them getting married in only seven months… What a short fuse (not sorry any more) until detonation! Unfortunately, it’s all about how their relationship is destined to detonate and implode as their marriage seemed like a good idea at the moment. As the time passes, and their year expiry date nears (as said by that woman that drives a Mini) the relationship clearly encounters its problems from the off. It’s no hidden fact considering the narrative jumps from their marriage counselling session with irate, man-hating Olivia Colman who clearly has marriage-hating experience to bring to the table. There’s also Anna Faris‘s Chloe who’s Josh’s ex and Simon Baker‘s Guy who is too good looking for his own good.

Comedy is subjective, audiences vary and find different things funny so promising humour is always a difficult promise to make. Audiences might be more prone to liking Stephen Merchant‘s Danny who seems to be lifted from The Inbetweeners, being like Jay Cartwright with lines that are completely out of place. A nice back and forth comes in the relationship between Minnie Driver and Jason Flemyng which is terrifying; their back and forth is harsh, it feels as if the film will result in them slicing and dicing each other. A relationship that abusive but survives questions the nature of reality. A scene that best sums up them is during a game of charades – a highlight of the film. Obviously the audience is essentially in the hands of Rafe and Rose who duly deliver their lines with a great comic measurement.

Restrained by its genre more than its writing, it leaves little to the imagination about the fate of these two leading to formulaic, melodramatic moments of romance. As the end nears, it all comes in such a horrible, predictable way that even the weather joins in on the predictability by, yes, raining. Everything falls into predictable, placing all the pieces firmly together like a three act jigsaw puzzle. While all of that traverses, and Stephen Merchant’s lines become more over the top, it starts to uncomfortably slosh into romance seasickness of the uncertainty of what is certain. It all feels a bit tragic come the end because, although it’s played for laughs, it isn’t a particularly pleasant situation. It’s sour taste isn’t caused by bitter characters but the sheer anti-romance of the situation. Asking for different then different delivers but it feels kind of wrong.

Besides the tragedy of the reality and the deterioration of a couple that was actually well painted in the first act, it has laughs and aggressive humour which is welcome in an often passive, stale genre. Unfortunately, it’s not all funny, some feel a bit placed for shock laughs rather than genuine humour, the looming sense of tragedy and the uncomfortable feeling of watching two liars lie a lot often distracts but it’s more than enjoyable and more than worth a watch. Dan Mazer has done a brilliant job casting this as they really bring his script to life bring some real belly laughs thanks to their delivery and comedic timing. An airport joke is full-on outstanding and the pride that comes with a successful joke will have people really relating. Though it suffers from the clichés of the genre, it has managed to avoid the biggest of them all and really change the direction, teetering on the brink of working and not; there’s more than enough to enjoy here if you don’t get cynical about a film that is quite cynical.

The film is released on DVD, Blu-ray and EST today, 03 June.

I Give It a Year