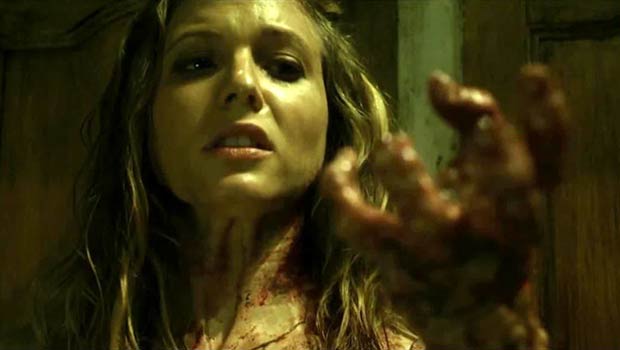 In the next few days, Evil Dead gets a chance to scare UK cinema goers following a box office bust in the States and a buzz from mostly positive critics. Now, it’s Britain’s turn to be possessed. In preparation for its release we spoke to Elizabeth Blackmore who plays Natalie in this remake-reboot horror flick. We spoke to her about Evil Dead, her favourite flavour of blood and, despite starring in this gore fest,  how she can’t bear to even watch horror films.

Australia is either an insomniac’s dream or nightmare. Time zones cause nothing but grief for all involved as you try to work it out and – if you’re an idiot like I am – can result in mistakes. That’s what I did. Waking up a bit later than the interview was intended for, panicking, bursting to the laptop to load up Skype – which had no credit left – then finding the number to ring an actress who may have been patiently waiting for the call. I cannot apologise enough to poor Elizabeth Blackmore who had to suffer my illogicality which caused nothing but… mistakes.

Unfortunately, that wasn’t the only problem encountered. When I finally loaded up Skype with my money, screaming at it to actually load and work on Windows 8’s poxy app as soon as it did work and get through to Elizabeth Blackmore’s patient, friendly voice there seemed to be a problem with my side of the connection with my voice faltering, sounding like a sincere stutter and splutter of a paralytic drunkard. Finally, when Skype got its sorry act together, we got the chance to chat to the lovely actress whose spirits seem impossible to dampen even after the erroneous struggle of connection between Wales and Australia.

Here’s what she had to say:

So what was it like working on a film with such a big cult following/name?

It was certainly interesting but, to be honest,  I don’t think any of us really thought about it too much. I mean, we had Rob and Sam and Bruce on board so we all felt kind of confident with it. They would kind of look after that side of things and we were free to film this new take on the classic.

And Were they on set often?

Well Rob certainly was. Sam and Bruce were back in the States but they would send us emails with notes and things and they talked to Fede a lot.

If you had to highlight any favourite moments from the film as a whole what would they be and why?

Well that leads me to my next question: How was it working heavily with practical effects instead of CGI? It must’ve been pretty gucky.

[Laughs] Yeah it was but it was great. It makes it so much easier – for us, particularly the actors – because you don’t have to imagine it; it’s there, it’s happening, and I think the film is so much better for it because it’s so much better than CGI. The reactions from us are because they aren’t computer generated.

How amazing is to go from the soap Home and Away to the highest box office position in the US?

[Laughing] I’ve done a little bit of stuff! It’s amazing! I don’t think any of us really thought about when it would come out, where it would be. We were making this strange little film in New Zealand and it’s really amazing that it’s doing so well. It’s very exciting.

What made you leave Australia?

I haven’t actually. I still live in Australia! I even auditioned for the film from Sydney and then we went on to shoot in New Zealand. They did a casting call in Sydney and then for the callback Fede flew out to meet me and, yeah, that was it really.

Was it difficult working with a first time director or did you find him to me more than capable?

No, I didn’t find it difficult at all. Fede took to it so amazingly and we were very lucky because he was the writer as well as the director; he was happy to talk about anything and everything. We’d have lots of chats about scripts and about characters. He’s so passionate at what he does and he had the whole thing set in his mind so  you couldn’t help but trust him and go along with it.

Had you seen the original beforehand?

I hadn’t, I hadn’t! I mean sure I had heard of it but I’d never seen it and then once I got cast, my boyfriend was like ‘OK, you have to watch it now!’ so we watched it but I’m not seriously not the best companion for a session of horror films. [Laughing] So I had avoided it up until that moment.

No, I’m really bad at it! [Laughing] Contrary to what people might think, being in one is totally different to having to watch it.

What do you think of it now that you’ve seen it?

Well, both of them.

What did I think of them…  I mean they’re so different but also the same. But I love that because I didn’t really know the original that well I didn’t really understand what they were doing, that Fede put in these little throwbacks and stuff in there for the fans. You know and respecting the original but still being able to do his own thing and make the film in his own style. I think that’s really cool. It was amazing to see it in Texas with all the hardcore Evil Dead fans and hear them love it. It was seriously exciting.

OK so you’re not a horror fan. What is more your cup of tea?

I love film and I love so many different genres. Probably my favourite though would be Wes Anderson, the black comedy, that’s where my heart lies really.

What ambitions do you have for the future? Any specific styles you’d like to try out?

Oh God yes [laughs]. Film-wise I would love to do a Wes Anderson film but at the moment, if anyone wants to employ me, that’d be an amazing offer [laughs].

Is there anything you’re working on at the moment?

In hindsight now, what was the working environment with the entire cast like?

They were amazing. I was really lucky. I was pretty scared going over thinking I’d be the only Australian with four Americans, what they were going to be like, but we all got along so well which was great because we were there for four months together. You know, we just had each other since we didn’t really know anyone else there. They’re amazing and I think Jane in particular was such a trooper through the whole thing. [Laughs] She had to go through so much and she did such an incredible job.

There must be some great stories from the set? Any pranks or anything like that you can tell us about?

[Laughing] Everyone asks us that! Not so much, we were all quite grumpy to be honest. Covered in blood and prosthetics and stuff. I think if anyone tried to pull a prank on us we would’ve cried. The weird questions and stuff would become routine. You’d be sitting in your make-up chair and someone would wander in and go ‘Liz what flavour blood do you want today? Do you want the peppermint, the vanilla?’ and you’d reply ‘Oh I think I’ll have the peppermint today. That’d be great.’ That was the weird environment we lived in.

And how difficult was it acting with all the make-up and prosthetics on?

It was definitely challenging. It was a big challenge. You know, on my longest day I think I spent about 6-7 hours in make-up in the morning which is a long time – it’s sticky and it’s heavy. But it was so helpful to have it. It helps you go into character and the right mood. We’d be filming at night and it was cold, freezing cold, and they’d drench us with water between takes. All that stuff helped so much. Miserable but helpful.

Then I accidentally hit the “end call” button, hanging up on a lovely actress who had been so accommodating as well as a genuine pleasure to talk to. Thankfully, I got to ring her back to apologise for my clumsy mishap and awkwardness to which she laughed it off as not a problem at all. I thanked her for a lovely conversation and interview and wished her the best to which she reciprocated. That’s Elizabeth Blackmore though, a genuine person who, even in the freezing cold, loved what she was doing. Wes Anderson, if you’re somehow reading this, give her a role in your next production; it’d clearly be a dream for her and a pleasure for the audience to see her work with you.

Evil Dead is released on the 18th of April in UK cinemas with an 18 rating thanks to its dedication to the original to keep it as gory as possible.