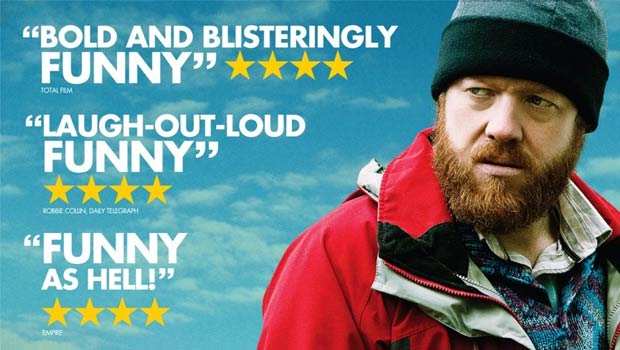 Sightseers tells the tale of two lovers and the secret terrors of caravanning and visiting idyllic tourist spots such as the Keswick pencil museum. This molotov mixture of caravanning and pencil museum’s sounds terrifying in itself but Sightseer’s deals with a totally different terror altogether which so needs to be seen to be believed. With Ben Wheatley in the director’s chair, renowned for the runaway success that was Kill List, and co-written by the film’s protagonists Steve Oram and Alice Lowe, Sightseers is a black comedy in the darkest and funniest sense of the words. So many waves has it been making, winning a plethora of awards last year (Empire Awards Best British Film and British Independent Film Awards Best Screenplay to name a few) it comes as no real surprise that it’s been picked up in the United States for a May 13th VOD release. Cinema Sauce got to chat with the film’s co-writer and star, Steve Oram, to get the lowdown on the film ahead of its US release.

Sightseers – which I thoroughly enjoyed – was to me like Natural Born Killers but made by Mike Leigh and set in some typical Northern English holiday locations. Was it sad of me to actually be interested in some of them? I was honestly taking notes.

Not at all, we love these places too. Both Alice and I spent most of our summers as kids on British holidays and so have great affection for them. Crich Tram museum is a particular favourite of mine. Why go abroad when you’ve got the whole of the UK at your fingertips?

There were some golden lines in the film. Do these kind of lines come to you while you’re writing the scene or do they come to you first and you have to then try to fit them in?

Well the good lines usually come while writing the scene, often in the flow of some 25 minute improvisation in mine and Alice’s case! But if there’s no logical place for it we wouldn’t force it into the actual script. There were quite a few good uns that happened when improvising on set too that made it in to the film.

You’ve worked with Ben Wheatley before. Did you know each other beforehand? Was he aware you wrote scripts or did you have to grab him on the set of Kill List and pitch Sightseers?

Yeah, we’ve known each other socially for a few years and I remember chatting with him about our different writing projects when he was just about to do Down Terrace. He had his entire film written on a tiny piece of paper in what looked like morse code! When it came time to look for a director I think it was an easy decision for everyone involved as we knew we had similar sensibilities.

Do you find it a different experience to perform something you’ve written or had creative input into than acting lines created by someone else?

Well, your own work is by far the more exciting to perform I feel. Especially in the case of Sightseers after such a lot of years developing the characters and script. That first day on set was pretty nerve wracking. Six years and now… go! That’s not to say performing other people’s work can’t be like that. It depends on how much you connect with the script and the character you’re playing.

Your character Paul, the talent scout from ITV2 in the Life’s Too Short special was a perfect caricature of the superficial, gimmick obsessed content finders and producers nowadays. Did you base him on anyone you have met in your dealings with TV and film?

Well it wasn’t one person specifically, more a horrible amalgam of those types with a bit of estate agent thrown in.

There’s some great music in Sightseers and you compose music yourself. Were you tempted to take on that responsibility as well or would that be a case of putting too much of yourself into the project?

No, it wouldn’t have been right. The film was scored by Jim Williams and he really did an amazing job. It’s distinctive and haunting and makes my hairs stand on end when those first few notes at the beginning come in. There is also a limited edition red vinyl soundtrack if you are lucky enough to track one down.

What are you up to next? Are you working on any big self-penned projects?

I’m busy writing a couple more films. One is called The Ballad of Graham & Stew, about a man and his simple brother who go up to Shrewsbury on a hit man job but are totally unsuited to the task. A sad Of Mice & Men disaster comedy!

Sightseers is slated for a May 10th release, prior to its May 13th VOD release. The film is already out here in the UK on DVD and Blu-ray and it’s worth so much more than it’s retail price.