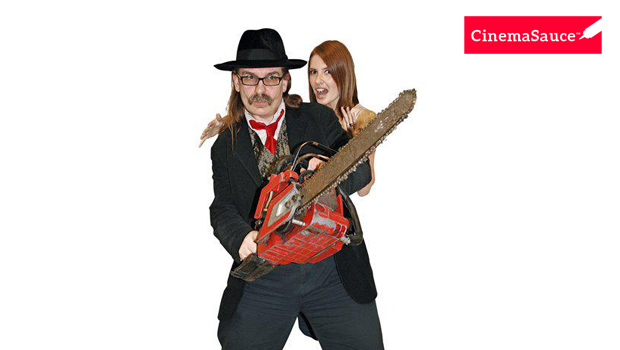 Cinema Sauce was lucky enough to catch up with the truly inspiring fiction-writer, critic and journalist Kim Newman. He has a clear penchant for both film history and horror fiction, attributing both of these vices to Tod Browning’s Dracula having left it’s mark when he saw it at the tender age of eleven. Newman’s work has been commended on a number of occasions with him receiving the Bram Stoker Award, the International Horror Guild Award, and the BSFA award. Most recently he is contributing editor for Empire Magazine, with his own highly succesful column ‘Kim Newman’s Video Dungeon’, and provides critical contributions to Venue, Sight and Sound and Rotten Tomatoes. Amongst other things, he discusses his interest in vampires, the problems with the constant rush of film remakes and he offers advice to budding film writers. 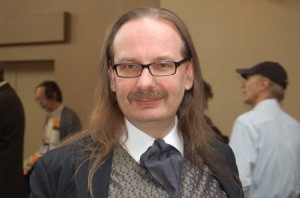 How did you get started? Who or what inspired you to work in film?

It’s really sad, but I couldn’t do anything else! I liked movies as a kid, like a lot of people who become critics later. I started making lists of the films I’d seen, for no real reason, and I kept doing that all through university.  It took me about a year to start submitting stuff to magazines. It was also due to unemployment. No one would give me a job and in the 80’s unemployment was elevated.  I’m still uncomfortable thinking about it as a career. Being a film critic is sort of an ideal job, but there aren’t that many people doing it – it’s quite a small field. Now, there are all sorts of ways you can get your opinion heard, you can post a comment on IMDB and if I was a teenager that’s what I’d probably be doing.

I hear you have a fascination with Dracula. What is it about him that interests you?

That was a key film for me, the 1931 version with Bela Lugosi. I became a big horror fan overnight, I think! I kept getting drawn back to it and I’ve written a few vampire novels. Vampirism haunts our culture. The vampire is unlike most monsters because you can have a conversation with it. It can be evil yet articulate. Unlike the werewolf and Frankenstein, Dracula is articulate evil. There are all kinds of readings and stories within it, whether it’s the romantic idea or based around its thuggery. It’s the most versatile out of the monsters and there’s a lot more you can do with it, unlike the Mummy. Don’t get me wrong, I love the Mummy!

Are you a fan of Twilight? How about True Blood or Vampire Diaries?

No. But it’s not aimed at my demographic. I think the first Twilight was good and the last was interestingly demented. I felt excluded from it, but it wasn’t aimed at me. I admire the way the films interact with their chosen demographic, but it’s not something I would choose. In my opinion, the novels are poorly written.

What was the last film you watched for the first time? What did you think?

Haha, the last film I saw was Iron Man 3 and I’m embargoed! I don’t even know for how long, I think ten days so I can’t say anything about it! I’m trying to think of other films I’ve seen this week..Scary Movie 5 and I didn’t like it although some people did. Oblivion was also all right.

What do you think a good horror film needs?

It needs everything a good movie needs and it has to be scary. You can tell the ones that don’t work. It has to get under your skin and be something you can relate to. Horror films that are successful are the ones that appeal to those who aren’t horror fans. It has to connect with a wide audience. It has to be more than just a scary movie. Paranormal Activity was a breakout film, but it’s all doors slamming and sheets pulled off beds. And that got to people because they could imagine it happening in their house.

There are a lot of horror film sequels and remakes coming up. What do you think about this? Do you think it’s good to revisit old films or is more originality needed?

There is a certain death of the imagination that comes with that. I’d much rather see an original. There’s a difference between stories such as Dracula and Dr Jekyll and Mr Hyde, where the point is to tell the story over and over again. Something like the Evil Dead is remaking a movie rather than retelling a story. It’s got some good shocks and its creepy, but there’s a feeling of pointlessness surrounding it, a ‘why am I watching it?’ type thing.

With the re-release of some old horror films such as Konga and Horrors of the Black Museum – many people may not have seen them, do you still think first-time watchers can be impressed?

Konga is an astonishing film on so many levels. It’s unashamed exploitation on an insane level. Maybe it’s time for a remake of it!

Do you think film criticism is declining in importance? Considering the amount of film blogs and budding critics there are out there now?

I’m not sure. There’s more and more voices so it’s harder to hear an individual. A distinctive voice will always be heard. It may not be something you want to hear but a good voice will always be there.  Perhaps it’s like a big game of musical chairs and there will be less and less people getting paid and only one will be left at the end! Everyone makes mistakes when they write and they won’t see it until it’s online. However, I am arrogant and won’t look something up, so I’ll write and know I’ve made a mistake! If you’re out there on your own, you don’t have a safety net. I find there is a problem with unmediated and unedited writing; it becomes quite hard to read after a while. Maybe standards will change and things will settle. Soon there will be reams and reams of stuff online and no one will be reading it.

What advice do you give to those trying to make a serious name for themselves?

It’s something that isn’t spoken about very much, work on the prose. It’s easy to come by a lot of knowledge and everyone has an opinion of a film. It’s being able to write in a way that people will want to read. It’s developing your own voice and making your sentences elegant and pleasing. I worked really hard on that and as a consequence some of my earlier writing is over-written.

Your novel Jago was re-issued last month, for those who haven’t read it – what can you tell us about it?

I wrote it in the 90’s, but it’s an 80s style horror novel. I wanted to write one of those communities overwhelmed by a vast evil force story, like one of Stephen King’s novels. There weren’t any British ones so I wanted to set my story in Britain instead of America. There’s an evil cult and characters with psychics abilities, the apocalypse and a rock festival all happening at the same time. I haven’t read it in a long time and out of all my novels, it’s the one I feel most distanced from. I have fond memories writing it though.

Any plans for a big-screen adaptation of it?

No one has seriously bought the film rights to it. I’ve sold the film rights to a few of my other novels, but not Jago. The British Film Industry doesn’t make those type of movies because it’s like an expensive Stephen King novel. It could maybe work as a TV series, but there are some things that are too gruesome for TV, haha.

What future plans do you have? What’s next for you?

I’m writing a ghost story, well I’ve actually finished it, but it just needs a bit of polishing and I’ve also written some comics.

If you were stranded on a desert island and were only allowed 3 items, what would they be?

Haha, some books…Maybe the Bible and something by Shakespeare, I’d just want something to read. I’d bring a pen and paper, some people would probably ask for a laptop but it would have to be solar powered or it’d die! I probably wouldn’t be able to stop writing.

Kim has been assigned as one of The British Film Ambassadors to mark the launch of The British Film collection which features the re-releasing of an array of titles from the collection and their place in UK movie history. To find out more about the releases you can check out the official Facebook page or find out more on the official website. All the latests tweets can be found using the following hashtag #TheBritishFilm.
The  next horror title of the collection, Konga, will be available to own on DVD from the 13th May.