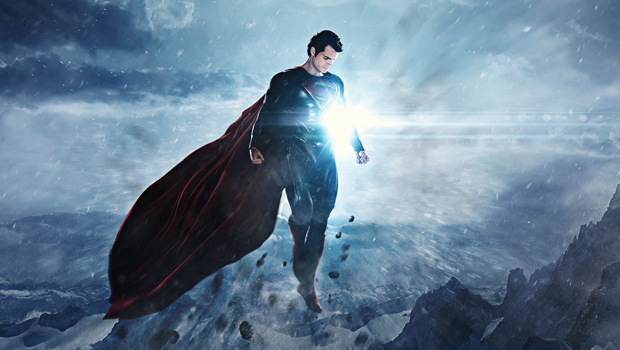 Superman is a superhero that is usually too perfect ability wise to really find enjoyable. His powers are almost immortal but his usual weakness is kryptonite which can be predictable. The threat of kryptonite has been exhausted which is why it’s such a blessing not to have it in sight for this film. David S. Goyer and co. have looked to humanise the alien Kal-El (Henry Cavill) in thinking about how he does he fly and many other aspects of Superman that have been previously overlooked. Unfortunately they don’t answer how he shaves. It’s a great morality tale but extrapolated to a grand scale. It may be huge but there’s an essence of intimacy, there’s character development and an ever present search for identity. Questions that humans want the answers to too.

We’re back at the origin of Superman, that’s true but the details are slightly different – as is the way. He’s a MAN of steel first before he’s Superman. It’s not an S on his chest either. There are changes to the usual adaptations that have previously been on screen but none of the character modifications made in Superman Returns. His morals are apparent throughout; being a shining light of goodness, being the ray of hope for humanity and Krypton. That’s where we follow him from his birth on his home planet as Kal-El, to his progression as outsider Clark Kent, to his eventual destiny of heroic Superman. It’s done before, of course, but the key to it is in the details. Refreshing the summer blockbusters by not trying to surprise or shock with a twisty narrative but focusing more on the character and ideals has worked well.

People instantly said that everything that works will see Christopher Nolan complimented and its shortcomings being Zack Snyder’s fault but here it’s definitely Zack’s film. His traditional love of slo-mo is ditched but his visual flair and eye for CGI is still there. There’s a definite personality in his work and the way he has allowed the film to be designed is a great imagining of everything iconic about the man. His suit, Zod’s suit, the planet Krypton, their technology; it’s all been reinvented, reimagined, redesigned. Its cinematography is sometimes jaw-dropping perfect, blending Malickian camerawork with the scale of blockbusters. Unfortunately the camera zooms of mockumentaries or the Duplass brothers are misplaced which draw you out of the picture when you begin to notice them.
After the disappointing outing of Superman Returns which people will always return to when thinking about this, it needed to undo the damage done by not only focusing on moralising Clark but on creating suspenseful, fulfilling action sequences. Thankfully the action junkie director as delivered it with such ferocity and velocity that becomes quite exhaustive in the third act. There’s a willingness for it to end on first viewing but when watching again and knowing what to expect, there will be a true appreciation of action set pieces that are thrilling and rewarding. Action in blockbusters is rarely as rewarding as this where the music, sound design and visuals match up so brilliantly to bring to the emotional peak you need. There are moments of questioning if Superman can not only win but rescue everyone that needs rescuing.

It’s immensely human with many an emotional, intimate scene which has more intensity than some of the action pieces – do not take that as a slight to the action sequences. Many a scene between adopted father and son are so real, so profound and so powerful that it may be a little hard to hold that lump in your throat down. Bringing a real punch to the stomach in wonderful moments. There’s a tear in our hero who has two homes, two families but ultimately one decision. Jonathan Kent (Kevin Costner) is exactly the father figure needed to help Clark become Superman. Moments between this father and son create the emotional nuance to mellow it out and make you feel. Plenty more of these would’ve been greatly welcomed.

Writing wise, this film feels revolutionary thanks to characters having more than a single dimension or an arc that doesn’t clunk from one side to the other. There is a female protagonist and a female antagonist who aren’t useless, who don’t scream, who aren’t flimsy or damsels in distress. They are people, capable people. Lois Lane (Amy Adams) has a nice character introduction but doesn’t fall into the trap of being held captive by the villains for Superman to rescue her. In the final act, she has stuff to do and doesn’t shy away from it nor clumsily cause more chaos than cessation of violence. Her protagonist isn’t the better written woman. Villainous sidekick Faora-Ul (Antje Traue) is the scariest, most vicious, violent, vindictive vision of a vixen that has stomped, torn, crushed, slaughtered her way through the monotony of the 2013th blockbuster woman.

Of course a hero is only as good as his villain but with Michael Shannon taking up the reins of General Zod means this film is tremendous. Shannon shouts his lines with such an intensity that one can begin to fear that he’s right outside the cinema screen waiting to crush humanity to rebuild his beloved Krypton. He, again, isn’t a one-dimensional character who isn’t as villainous as you might expect. They’ve brought humanity to Superman but they’ve brought it to the genetically engineered Zod too. He is doing what he does for a reason, for his purpose, for his soul – as J.J. Abrams said “every villain thinks he’s a hero” and that’s the exact description of Zod’s incarnation here. Terrifying but his reasons are understandable. He’s the way he is because he was created that way. Crafted to be ruthless to promote the healthy continuation of his home planet. Zod’s introduction to Earth is great horror territory, being perfectly filmed in that genre to really finalise how frightening the character he is with every echo of his words harrowing to the bone.

The film lives and dies on whether or not Henry Cavill can embody the caped crusader. He really does. He may even be the standout performer of the entire ensemble which is a huge compliment to a man who is opposite Michael Shannon. Henry Cavill has managed to make Superman his own but also be the Superman you expect and want. Everything he is, is the way Superman should be. He is wise, compassionate, kind and selfless who can rise above challenges for the greater good. Humanity needs him as he is the inspiration to be good, to promote the patience that is sorely lacked lately. As the cape goes on he embodies the iconic character instantly. He IS Superman.

People might be disappointed by its lack of humour or wit but this serious Superman incarnation is the perfect way for DC to counteract Marvel’s monopolising humour. Superman and Batman are serious characters with serious problems, themes, ideas and villains which bring a gravitas to its realism and sincerity. Where this Man Of Steel may vary from other comical incarnations and its 21st century predecessor, it’s everything that it should be, befitting the time of its creation. Zack Snyder has created a nail-biting, heart-stopping, throat-lumping mashup of heart and power that’s truly welcome in cinema’s austerity of earnestness and real gravity. Power is back with Superman, which is duly delivered in an exhaustive, draining crescendo of action packed with intimacy. Captivating, gripping and relevant; a do-over of all do-overs that has divided but duly provided.