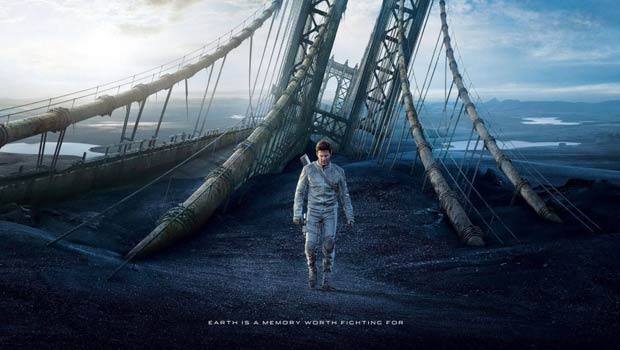 Oblivion is set 80 or so years into the future on a post apocalyptic Earth. Tom Cruise plays Jack (again) a former marine commander and one of the last remaining men on the planet. His job is to act as a maintenance mechanic, repairing faulty Drones. The Drones are armoured airborne machines that patrol earth protecting it from scavengers using up the last of earths remaining resources. Things, however, get complicated for our hero when a beacon brings down a ship, carrying a surviving female. Who is she? Where’s she from? And just why does the Cruiser find himself trying to help her?

I’m not going to answer any of those questions for you, you’ll be happy to know.

I’m also not going to tell you how and why the Earth is on its last legs because it’s a nice little opener. In fact, if you find this report to be a little sketchy on details, it’s because it’s kinda difficult to say too much about this film without certain plot points being revealed. Not that I doubt any of these plot points will come as a shock or surprise when you watch Oblivion, but just in case; I’m never really up for spoiling anyone else’s experience.

First, almost everything in Oblivion is executed pretty well. The effects, sets, locations and performances are all pretty solid and there is a decent symmetry and resonance in the structure of the scripting. Anyone picking too much fault with any of these elements is probably nitpicking a tad. Having said that: if there is a reason for all of those elements being ‘solid’ it’s because the film never really pushes itself into being something a bit more memorable. In places Oblivion feels like a modern version of cheesy 70s/early 80s sci-fi film, but done really well. There is probably a reason for this.

I’ll be honest, going into this film I hadn’t done my homework. I didn’t bother to look up who the director was, where the story had come from, who wrote it, who produced it – I didn’t know. All I knew was; Oblivion is a big budget sci-fi film starring Tom Cruise. To be fair, where the Cruiser is concerned that’s usually all you need to know. IT’S A TOM CRUISE MOVIE!! I think we can all make certain assumptions about what we’re going to get (we got it btw).

So anyway, watching Oblivion I couldn’t help shake a feeling that aspects of this movie felt very familiar. The blocking, the pacing, music cues, the sullen quality of the characters and just the general atmosphere – I’d experienced this all before: Tron Legacy – the 2010 sequel to that 80’s …classic(?).  That’s not to say Oblivion is as good or as bad as Tron Legacy, but it would certainly appear that director Joseph Kosinski who, YES, I now know also directed Tron Legacy has already carved out his own specific style. So kudos to him I guess, and kudos to my reviewic spider sense for picking up on it. (Reviewic is now a word).

As nice as Joseph Kosinski’s style of filming making is, it does come with a few drawbacks however. The main one is often in the way he builds his scenes when getting to the big moments. They sometimes come across as a surreal music video, which is nice but it doesn’t really allow the film to get out of second gear. The effect of this is I found everything, be it a plot development or set piece, to be telegraphed a little too much – almost to the point where I was 5 minutes ahead, waiting for something I’d already anticipated to happen. This issue probably adversely impacts the action scenes more than it does the delivery of the plot. Unless, of course, the plot developments are actually supposed to be mega mind bending twists; then that’s probably pretty much a bit of a fail. I’m quite certain you’ll see most things coming. However, if we simply consider events or reveals as just plot developments or an unfolding of the story, Oblivion works quite well.

If I am going to fault anything, it’s basically my lack of empathy for the characters or their relationships. Have you ever watched, say, a Chris Nolan film and realised in the third act you’re invested in (let’s call em ‘tertiary’) characters for who you’re struggling to recall a previous scene or their function thus far plot-wise? Well, if you have, don’t expect that to happen here, even with secondary characters. Take Morgan Freeman‘s “Malcom”. There was nothing there to really cling on to, and this is Morgan Freeman we’re talking about. Plus, his character, and what he represents, plays a pretty integral role (he’s even side by side with Cruise on some of the posters), and yet, his involvement in the films climax (to me at least) added little emotional value.

I would lodge similar complaints at most other characters in Oblivion but there are either very good narrative reasons for why this is the case, or, I would have to enter spoiler territory to explain them. Overall though, I would say I enjoyed the film. Cruise does his thing and I was happy to see a movie set in the future which didn’t result in grimy looking blue tinted colour palettes to tell the story. So yeah, Oblivion passed the time well but was pretty much forgotten the moment I left the cinema, which doesn’t always help for writing reviews afterwards.