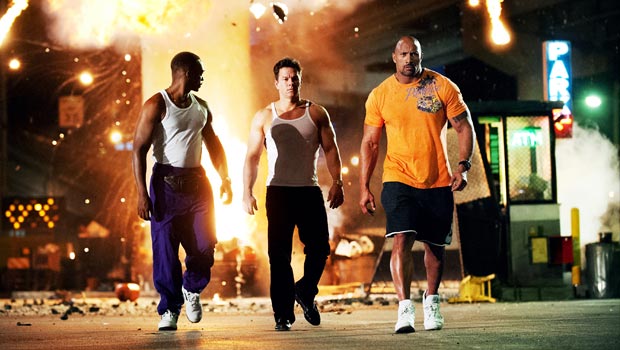 Leaving a screening of Pain & Gain, the latest offering from Michael Bay, above anything, you’ll more than likely feel exhausted. It’s an adrenaline-packed extravagance of a film: ridiculously fast-paced, leaping from plotpoint to plotpoint like a clockwork toy too tightly wound. The true story on which it’s based is fascinating: a trio of less-than-intelligent bodybuilders plot to kidnap a wealthy colleague from their local gym and make off with his fortune. In the right hands, it could be brilliant. In Bay’s, it’s a little hard to swallow.

It’s evident that Bay’s direction isn’t suited to this type of story. It’s suited to the type we’re now accustomed to expect from the man who brought us the Transformers trilogy – where special effects run rampant and plot lies thin on the ground. Where nostalgia for metamorphosing mechanical toys twinned with the odd explosion carried that series, Bay can’t rely on the same to get us through Pain & Gain. It’s billed as a comedy, though there’s little to find amusing in the the torture inflicted on Lugo’s kidnap victim (Tony Shalhoub): not merely implied but explicitly shown in Eli Roth-esque glee. He’s punched, handcuffed, strung upside-down from the ceiling, set on fire and run over, slowly, twice. Hilarity doesn’t exactly ensue whilst all this occurs, but disturbingly nor does our judgement of Lugo and co. Despite their penchant for murder and misogyny, Bay never invites us to detest the characters, a notion that leaves an extremely sour taste.

What’s more, this is not a film that shies away from the fact that these grisly goings-on actually happened. “This is a true story” is even the tagline. So to take a story with so many macabre elements and treat it in a comedic fashion is profoundly disorienting, like watching a family-friendly cartoon about the Mansons. One especially gruesome scene depicts Lugo and his cronies dismembering corpses before roasting the remaining limbs on a barbecue, at which point we’re reminded via a thick caption that THIS IS STILL A TRUE STORY. Perhaps we’re intended to find it hysterically absurd that the story is true, but all this caption does is remind us that this is a comedy about two real murders: enough to silence the laughter in any cinema.

On the plus side, the acting is decent. Mark Wahlberg, always outstanding in supporting roles, may never quite stake out a name for himself as a leading man, though he makes a valiant attempt here. Ed Harris and Tony Shalhoub don’t exactly play against type, but perform admirably. The Rock (Dwayne Johnson) is the real surprise: for a man continuously posited behind the wheel of a speeding car in his movies, he demonstrates ripe comedic flair (particularly impressive for a film lacking jokes). And who can find fault with Rebel Wilson, whose welcome appearance midway through the film steals the show?

With the chemistry between the cast, you can’t help but feel that if, say, the Coen brothers had directed this, this could have been something special. As it stands, it’s a crude couple of hours that leaves you feeling you’ve been blasted out of a cannon crammed with sexism and bad taste. Rape jokes, anyone? There’s plenty to go round.

James Morton is a writer, playwright, filmmaker and Durham graduate, working in TV. To date, he has written 9 plays and produced over 20 short films. He is currently based in London, working on a series of shorts and a feature length project.