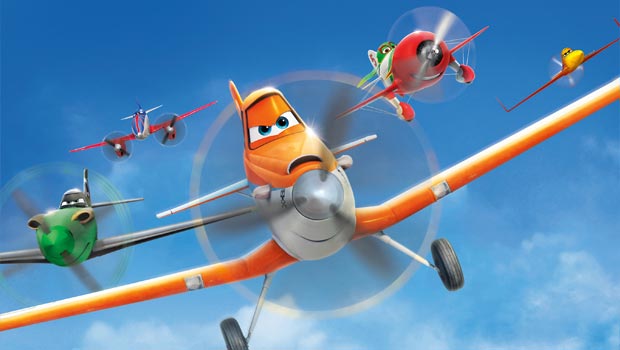 Class is permanent, so they say. It’s class that keeps Pixar filmmaking at such a consistently high standard. Sure they like making money, and they’re very good at making a lot of it, but they have the decency, the integrity to give art the higher priority. When I see a Nemo plush toy, it doesn’t make me angry – I think, “You earned that extra buck, well done.”

There’s a consensus that the Cars series is the worst of Pixar. Part of that is because it’s intentionally targeting a younger audience, which is a hard thing to begrudge. The first film still leaves space for the heartbreaking nostalgia of the “Our Town” sequence, plus Paul Newman in his final movie role. Cars 2> was a misfire, but at least it seemed it was trying something – cars as secret agents isn’t exactly obvious.

Unfortunately, Planes is not Pixar. It’s produced instead by DisneyToon Studios, originally intended to be released direct-to-DVD. That’s probably where it belonged. The story is an around the world journey through national stereotypes, with plucky protagonist Dusty Crophopper (voiced by Dane Cook) the little cropduster who wanted to be a racer. Cars was careful to be about more than just winning a race, but Planes is as perfunctory as can be imagined. Guess who wins.

The man to beat is arrogant 3-time winner Ripslinger (Roger Craig Smith), a stock villain seemingly based on Lance Armstrong. Other competitors include several crimes against national identity: a sexy Indian love-interest, a crazy Mexican bloke and a Brit called Bulldog – John Cleese again demonstrating the importance of a solid pre-nup. It’s sad, but I now groan whenever Cleese appears in a movie.

Never has a film tried so hard to sell toys. The cast list is endless, with every available second spent introducing/advertising new characters. Somehow an aircraft carrier gets a speaking part, even a train makes an appearance. A sidekick within the movie gets rich from selling merchandise – that’s meta. Any spare dialogue is usually engineering or aeronautics rambling that will go over the heads of most adult viewers, let alone the kids.

Even with a flimsy plot, the 3D flying sequences still should have thrilled. Late on there’s an exhilarating (if unexpected) WW2 flashback that demonstrates they knew how to make an spectacular set piece, but mostly the action feels flat. Maybe it was a cost thing, or perhaps they were worried about frightening their young audience. Thinking about it, I’d love to see a war film set in this world, with the planes and tanks living, breathing participants. Imagine Lightning McQueen with half his face blown off. Probably too much to ask for.

The moral of the story is be who you want to be, which makes absolutely no sense in a vehicular world where your design determines your function. How does childbirth work in this setting anyway? Is there some shadowy government organisation determining production quotas? If a smashed plane has all its parts replaced, does it remain the same person? Where does a machine keep its soul? So many unanswered questions.

I should throw in the standard disclaimer that Planes may be entertaining for young kids, but those guys will like anything. I’d expect that a smart seven-year-old would be too sophisticated for the movie. For even younger viewers it’s overlong at 92 minutes, it should have given up at 70, but that would have lost valuable advertising time. The merchandising focus is simply offensive to parents in this wintry economic climate. Beware using Planes as a babysitter, it might end up costing much more than you expected.