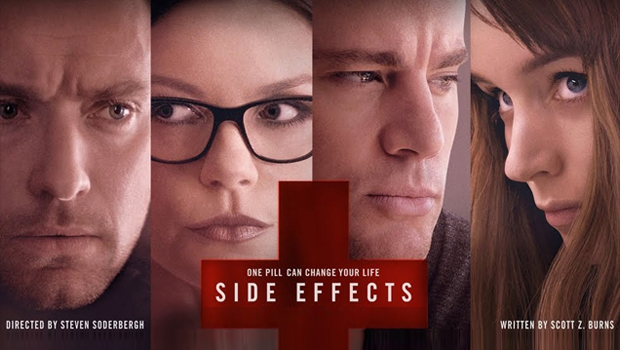 Side Effects has since witnessed Steven Soderbergh announce his retirement from film citing problems with executives, producers and a lack of respect to filmmakers. This, being his swansong, is a loss to cinema as this is a great film by Soderbergh who had now seemed a lot more stylish, more comfortable with directing. Trailers have painted this in different ways for different people with their own interpretation of what the story would be like, already trying to guess the ending but to not guess makes this film a much more thrilling ride. One with all the highs and lows of drugs – prescription or otherwise.

Emily (Rooney Mara) is welcoming her husband home from prison (Channing Tatum’s Martin) but on his return, Emily’s depression comes back and they seek the advice of Dr Jonathan Banks (Jude Law) and some prescription drugs. Avoiding the idea of fixating on a message about the devastation of drugs, it instead stays true as a suspenseful misdirection that’s surprises are better kept surprising. It shuns the idea of blatantly giving you a message to mull over during and afterwards, not making you second-guess the next time your headache is getting you to pop some tablets but without completely disregarding it with hints of satire. Instead, it aims to be a classic ‘whodunit?’ with the addition of what and why.

Scott Z. Burns’s sharp script is successful thanks to Soderbergh’s steady, patient pacing  composited by his steely, contemporary cinematography. One of the highlights is Soderbergh’s use of focus throughout – characters step into focus adding some mystery.  Detailed framing of carefully planned shots accentuate the film to make some of the nicest shots of his career, screaming of Soderbergh’s fine tuned visual personality. There’s a real sense of authorship in this film with themes of his past films amalgamated but not messily; everything’s dealt with by a confident hand that’s precarious enough to not overload it all. Even the cinematography, performances, editing writing and music help ooze an eerie sexiness, creating more atmosphere than most modern horrors.

Although it’s good to recognise the technical efforts of the film it’s hard not to focus on what’s mainly being framed, with the weight of a script that deserves to be performed ably. That’s where Side Effects comes alive. Rooney Mara’s performance is her first lead role since The Girl with the Dragon Tattoo, out of the punk clothing, she’s more socialite than anti-social, dressed with classy clothing of a woman of (ex-)wealth. Mara’s charisma adds a lot of gravitas to Emily Taylor’s role, making her the most intriguing character to sympathise with but the arc is complicated but it’s welcomed. Then there’s Jude Law’s obsessive, good guy with a belief in psychiatry and pharmacology. Jude Law needs to hold it together unlike his character which he does with a brilliant realism, making this one of his best performances of his career. When he screams “I want my life back in the trailer” it’s moving; in the context of the film, it’s mesmerising and involving.

Clinical precision is the most efficient, fitting description this film can have. Everything is not as it seems with a surprising turn of events that would be rude to spoil as well as ruining the fun of it. Not one thing in this film is fixed as it rocks like a slow-mo white-water rapid ride, calm and elegant at first but once it kicks in, it isn’t a white-knuckle thriller, but calculated navigation through problematic rocks. Side Effects is a Hitchcockian thriller that steadily paces trickling suspense until it intriguingly overfills with gleeful frustration, splashing over in the final twenty minutes. A puzzle that’s payoff is almost earned by the audience but slightly unfulfilling because of how your allegiances align throughout. Losing a craftsman of such eclectic output is disappointing but leaving on this high note almost makes up for the loss.