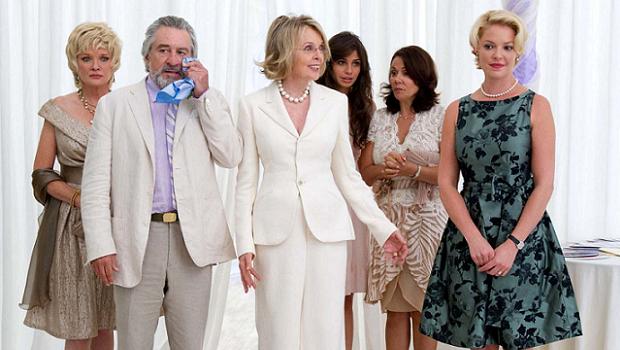 You’ve seen them before. The light-hearted, big (usually American) family gathering wedding movie where personal issues resurface, secrets collide and calamity ensues. However, it’s always the overriding sense of warmth within these films (I hope you don’t need me to list examples by the way) that endures within the narrative and wins out in the end. The Big Wedding boasts a lusty cast with the likes of Robert De Niro, Diane Keaton, Robin Williams, Susan Sarandon, Amanda Seyfried, Topher Grace, Katherine Heigl and Ben Barnes.

Notwithstanding, the huge cast plays a rather irresolute role in the overall success of the film. What I mean to say is, with none of these established stars really providing the goods they are know best for to elevate the material; most of the roles would have been just as well served played by unknowns. To be totally honest, it may have even aided my belief in the characters and I wouldn’t have been plagued be flashbacks of roles the likes of De Niro used to push for.

In a nutshell, The Big Wedding centres on the Griffin family. De Niro plays Don Griffin, who’s currently savouring a relationship with his divorced wife’s best friend. Don has a son, a daughter and an adopted son – Alejandro, and it’s Alejandro who’s getting married. Each character, of course, has their own personal malaise to deal with but it’s the news that Alejandro’s devout Catholic biological mother, Madonna (Patricia Rae), will be attending the wedding that causes the central friction, meaning Don and his ex-wife have to pretend they’re still a happily married couple.

So what I can I say about The Big Wedding that you won’t have already guessed going into it?

I guess an obvious matter to address from that previous riddle-like line is my implication that The Big Wedding is predictable. In short, I suppose it will be for most viewers. Having said that, this in no way means it’s all been there, done that, bought the T-shirt bunk. Although the sterner beasts among you will think the latter, I’m going to go out on a limb here (but just the one) and suggest that the film has some nuggets that will certainly bring out a grin on your face. For the benefit of those who didn’t give up after my use of the word predictable, on the basis of my underlying negativity, let’s start on a good foot.

First and foremost, The Big Wedding never overdoes melodrama and never becomes overly sappy. Yes, there are one or two heart-to-hearts and moments of angst, but these moments aren’t dwelled upon meaning the potential fluff is reigned in. Second, I appreciate the fact that there’s no villain – I don’t know why, I just do. Even the characters you’d expect to be portrayed as jerks aren’t ever really vilified and are still accepted by the film’s end. The overriding strength of The Big Wedding is that it is filled with a plethora of divergent characters who are very likeable. The film feels like one of those lazy Saturday afternoon movies everyone loves to watch lounging around on the sofa.

This begs the question as to why this film might not be such a fulfilling cinema experience. The scripting is somewhat disparate, the plot is particularly lightweight, and the general setting just doesn’t feel as realistic as it probably could have and should have. Given the film’s task in hand, the last point is actually fairly minor, so I’ll get to the main stumbling block – the comedy! Whilst minor retorts between characters are actually fairly amusing, the big gags, the slapstick, set pieces, and the plot climaxes don’t quite hit home, especially in terms of humour. This is partly because the comedy is a bit too predictable, terribly telegraphed and executed but it’s also down to the iffy plot devices they’ve had to put in place to reach these culminations – Don being drunk out of nowhere is a particular example.

Overall, there will be films a lot worse to come out this year and The Big Wedding will certainly cater for an audience, providing them a very rewarding experience. After all, despite any shortcomings, the film is adeptly put together, relatively inoffensive and will most likely have you leaving the auditorium on a high. It is just a shame and a surprise that, given the talent involved, I can’t help but think you’ll be wanting or expecting something more. You’re also probably wondering, an entire film review of a comedy with Robin Williams and I didn’t even mention him (not sure if that’s my fault or theirs).

The Big Wedding will be celebrated from the 29th of May in UK cinemas.