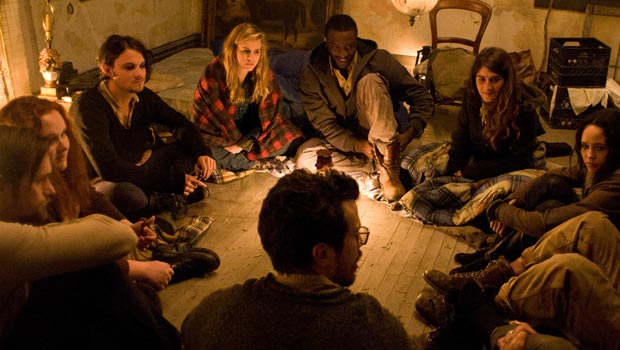 I love capitalism. It is the greatest device for alleviating poverty yet conceived by man (plus it gives me all my things). The movie industry as we know it is a product of capitalism, and I greedily consume its products – the concept of an anti-capitalist Hollywood film is an oxymoron.

I recognise that capitalism has its drawbacks – perhaps as much as half of all food produced worldwide goes to waste, yet millions are still hungry. We should do something about that. But to at least some extent, waste is a consequence of choice, and with my first-world lifestyle I’m happy for the freedom to have what I want.

The East is about a bunch of people who don’t agree with me. They form the eponymous group of eco-activists/terrorists, favouring direct action against their corporate criminal targets. Tasked with infiltrating the gang is special agent Sarah Moss (Brit Marling), an undercover operative for a private intelligence film.

The group is led by Benji (Alexander Skarsgård), introduced with a beard right out of The Hobbit, later neatly shaven and showing his bum. His trusted lieutenants are Izzy (Ellen Page), shuffling like Juno but with more angst, and Doc – the lesser known Toby Kebbell, by far the most interesting character in the piece.

‘The East’ practice freeganism – only eating discarded food, often scavenged from bins. It’s set up as a key aspect of their beliefs, but there’s very little of it in the film. I would have been interested to see the intricacies. At university, I knew of a group of freegans who would regularly raid the bins behind Marks and Spencers for disposed-of sandwiches. M&S responded by dousing the bins with bleach. I can see both points of view.

For a band of hippies, they sure do scrub up well. Without access to soap, they slip on fancy clothes and blend effortlessly into high society. The film under-represents just how smelly these people would be, preferring not to spoil the image of their pretty movie stars.

Eco-terrorist is a controversial term, and in this case, a gross exaggeration of the characters’ actions. The “jams” perpetrated by ‘The East’ are driven by personal grudges rather than ethical agenda, petty revenge not ideological warfare. Not enough attention is given to the characters’ motivations, and they come across much less interesting than they ought to be.

At the centre of the malaise is Brit Marling’s implausibly naive super-secret agent. Marling is the co-writer as well as lead actress, but she’s written herself a dreadfully bland part. She’s supposedly a former FBI agent, with framed certificates proudly displayed on the wall. Given her general performance, I presume these were awarded for good attendance.

The film overall is only very weakly political, much more interested in following a Hollywood thriller narrative, complete with shoe-horned romance elements. If this was the goal, it needs to immediately lose 30 minutes – the pacing collapses in the later sections as the plot repeats itself.

Parts of the story don’t make much sense. You would expect the targets to be companies operating immorally but within the law. But no, instead they are blatant criminals, usually without any clear business reason for their actions. The activists hold indisputable evidence of the crimes, but the idea of passing this to authorities is laughed out the room. This is feeding conspiracy theories rather than commentating sensibly on the issues. Maybe now I’m being naive.

There are some interesting touches around the edges. The impact of the internet on both surveillance and political activism is interesting – keep a fake Facebook profile updated and no one notices you’ve been off the grid for years. Then a character is described as “interfacing with the deep web” and it loses all its bonus points.

‘The East’ wants to be important. The aim is issue-tainment, like Blood Diamond or The Constant Gardener. The problem is that the issues aren’t well discussed and the story isn’t entertaining. Worthiness and silliness are a toxic mix, and that’s what the third act becomes. In summary – not gourmet dining, but better than eating out of a bin.