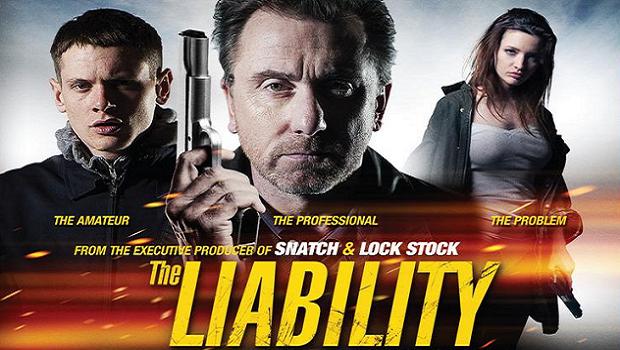 The Liability is about a teenage boy called Adam (Jack O’Connell) who agrees to act as a driver in his step-father’s business. The person Adam will be driving around is, I might as well tell you now, a hit-man named Roy (Tim Roth) who takes Adam down a pretty dangerous road of murder and other forms of highly illegal activities. As with many titles such as this, The Liability could be interpreted as referring to a number of things. Firstly there’s the lead character Adam, whose laziness and ill-judgement is responsible for many of the narrative developments. Then there’s the loose end plaguing the business of Adam’s stepfather, played menacingly by Peter Mullan, who heads a crime faction on the sly. It’s this pretty horrible business that’s at the forefront of the story and, as you’d expect, comes to a head for the principle duo of Adam and Roy.

So, as my use of brackets indicated, Adam is played by Jack O’Connell. Fair to say, I haven’t loved Jack O’Connell in, well, much of anything so far. In the few episodes I caught of Skins, although there was some spark there, I found him irritating. I couldn’t get on board with his character in The Runaway and for me he failed to embody the soul of Bobby Charlton in the BBC Munich crash film United. So I was a bit on the uh-oh side knowing the film rested on his shoulders. However, to my relief, O’Connell weren’t too shabby at all. His Adam is a drug obsessed layabout who gets a laugh out of general stupidity and destruction. In fact, Adam is pretty close to O’Connell’s character in Skins except toned down a touch, allowing just a bit more charm to come through. I’m convinced O’Connell must be a wee bit like this in real life, as it’s the role he seems most naturally suited to.

Tim Roth as Roy the hit-man weights the story nicely, providing the film with an air of confidence. Not quite in full Roth-a-tron mode, I found his toned down mannerisms succeeded in holding my curiosity and creating added interest as his scenes unfolded with O’Connell. Roth’s character (‘Roy’ in case you’ve forgotten) is a very quiet, no-nonsense, calm and precise assassin. Roy holds his cards closely to his chest and thus, its rarely clear what he actually thinks of his young driver and this actually enhances the drama and (most of all) the humour – props most also be given to O’Connell’s finely tuned body language, facial expressions and comic timing in this respect. As the relationship between the two characters develops, Roy in his own stand-offish way becomes the mentor figure to Adam that he, one would assume, never really had. Granted, most of what Roy is passing on are tips of the killing trade, but it’s a start right?!

It must be said, for some, The Liability will be slowly paced, one note, lightweight, maybe even artsy, with the world that the characters inhabit totally unrealistic. All those criticisms are perfectly valid and true. But, the thing is, the film gets its meat and potatoes right; the anticipation, humour and violence – which by the way, manages to be unnerving without ever resorting to gratuity. In fact, it wouldn’t surprise me if there was actually far less violence in the film than my head tells me there was. Another interesting thing, which is to the film’s credit, is people’s reaction to violence. Particularly Adam! Here he is, presented to us as a normal kid, untouched and oblivious to the nastier side of life, suddenly aware that he’s about to be aiding in a murder. And, well, he doesn’t bat an eye lid, worry or really do anything except ask if he can do the deed himself. At this point, you’re thinking he’s got to be a psycho or at least slightly twisted, and you (well, I did) start looking for some sign to prove this thought true. But no! Such is the confidence of the filmmakers in the easy going tone of the story – they present you with no such excuse. It simply doesn’t bother the kid and, what’s more worrying, it didn’t actually bother me or inflict upon my opinion towards the character. Guess that meant I was just as on board for the ride as Adam was.

In short, The Liability is a bit of a difficult one to pin down. Yes, this film deals directly with the underworld, but don’t go in expecting a gangster pic. And yes this films contains guns and pursuits in cars but don’t be expecting an action movie. And YES, this is about a 19 year old lad learning (in bits) about responsibility and experiencing new things for the first time but don’t go expecting a ‘coming of age’ film. What you should go into this film expecting is a pretty entertaining piece that passes the time very well indeed. To me, The Liability feels like the ugly, less accomplished cousin of In Bruges. You’ll know what I mean when you see it – unless you’ve not seen In Bruges – then you might struggle to grasp my full meaning. Pacing, tone and the mixture of down-to-earth humour and violence gives both films a kin or comradeship to one and another, and it’s this care free formula that makes them very easy to watch and, whisper it, enjoy.

The Liability is released in the UK on the 17th of May.