We have teamed up with the guys from Need For Speed: Movie to give our readers the chance to win a fantastic pack of goodies.

Aaron Paul and Dominic Cooper lead an all-star cast in the biggest and most thrilling action film to release on 3D Blu-ray, Blu-ray and DVD this summer – NEED FOR SPEED – which is available to pre-order now.

Out on 21st July, this high adrenaline-fuelled tale of revenge and retribution is a must-see for those who relish breathtaking stunts and sensational cars – and we have 3 Blu-ray copies to giveaway plus a merchandise pack which includes a cool T-Shirt, Alloy Wheel Clock, USB Stick & Keyring! 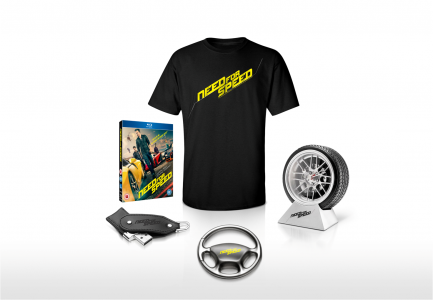 Framed for a crime he didn’t commit, street racer Tobey Marshall (Aaron Paul – Breaking Bad), joins an adrenaline-charged cross country supercar race with only one thing on his mind: revenge.

When Tobey’s main rival Dino (Dominic Cooper – The Devil’s Double) learns of his plan to compete he places a bounty on his head for anyone who stops him from reaching California. With Tobey’s reputation on the line and his life in danger… the race is on!

Inspired by most successful racing game franchise of all time and full of explosive action and exhilarating stunts, NEED FOR SPEED breaks all the limits.

To be in with a chance of winning, just answer this question: Which U.S state does the De Leon race take place?
a) Nebraska
b) Ohio
c) California

Fill in the form below to complete your entry. Competition closes 31st July 2014. Terms & Conditions Apply.