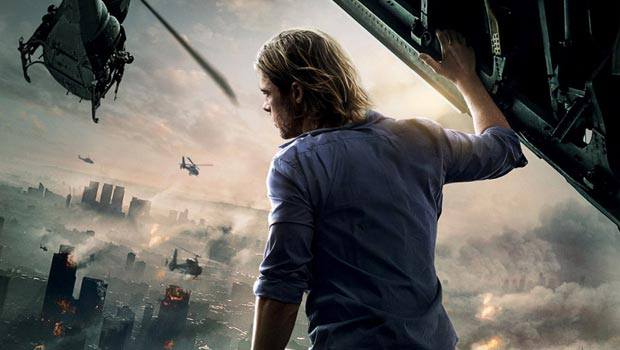 Max Brooks sold the film rights of his critically acclaimed zombie horror novel to Brad Pitt‘s Plan B Entertainment back in 2007 for a sweet $1 million. Six years later, the movie adaptation is here, and for better or for worse, it’s set to be this summer’s most talked about film.

It’s worth saying from the start that World War Z makes a major departure from its source material. Where the book follows a journalist piecing together an oral history of a zombie pandemic ten years after the event, the movie follows retired UN employee Gerry Lane (Pitt) as he tries to find a way to save human kind as the pandemic spreads.

We start happily enough, around the breakfast table of the Lane household, as yet another city succumbs to martial law. It’s a pleasantly short set up, before we’re thrown head first into the first signs of real trouble, all witnessed from the perspective of one family. It’s not long before there are hordes of zombies stampeding the streets of Philadelphia, and the family must stick together and escape. Luckily for us though, Lane is ex-UN and can summon helicopters to his rescue. And so it begins.

From then on, we bear witness to one of the biggest, most bombastic action blockbuster I’ve seen in years. The sheer scale of the sets and the quality of the visuals is a treat. It’s a riveting cinema experience from start to… well, finish, if you can call it that. The last act of World War Z is fine, but only fine, but it’s not a fitting climax for a film that builds and builds itself up so well as it goes along. The only problem is that it ends where it does, just before the real ending should come.

World War Z is two thirds of a very good film. On the one hand, it’s a big, booming, globetrotting 3D action flick with an intriguing story that hooks you in from the start. Visually it’s kinetic, tense and exciting, with some excellent set-pieces and near iconic action sequences. The cast is excellent, in particular, Peter Capaldi and Mireille Enos , both of whom deliver subtly powerful performances.

On the other hand, there are numerous, glaring problems with the film that can’t be ignored. The dialogue is thick with exposition and foreshadowing. For instance, there’s a scene just before Lane sets out on his quest where an eminent doctor gives him everything he needs to know to find a solution for the zombie pandemic, before accidentally killing himself as soon as they land. Once he’d outlived his use as a plot device, he had to go. It’s lazy storytelling.

There are other examples of this slipshod approach to the script. Not, I fear, completely the fault of the writers, but more the studio businessmen who have tailored (read: butchered) the story to appeal to the maximum amount of people possible. It’s understandable I suppose, to try and recoup the reported $400 million now spent on the film.

But, the most frustrating thing about World War Z is the last third of the film. It’s widely known now that the final act was re-written and re-shot at massive expense, adding over $100 million to the final budget, to ‘make it work’. It’s also been said that filming started before the actual script was even finalised, which would explain this.

The last act resembles the climax of a reasonably inexpensive sci-fi TV show, but it’s the ending, or lack of, that will really disappoint audiences. It’s all well and good making a film sequel-friendly, but, to forego a satisfying ending to a film just for that? It’s a total cop-out.

So, two thirds of a good film. Mostly a genuine pleasure to watch, bar the silly 3D distractions, with some great sequences and good ideas, but also, a cynical business exercise focussed more on recovering losses than giving the audience the best possible experience. I’d love to see a director’s cut or redux version in a few years – one where all the scenes they cut are reinstated, and the story runs as it should, because that could be a great movie. The World War Z that people will see at the cinema in 2013 is almost a great film, brought down by its flaccid end.